MAY 21, 2013  THIS PROPHECY WAS BROUGHT ON TO PROPHET BENJAMIN COUSIJNSEN, IN THE NAME OF YESHUA HAMASHIACH, ISA, JESUS CHRIST: A VERY LARGE SOLAR FLARE WILL CAUSE MAJOR DAMAGE! 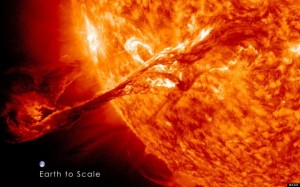 Hello, welcome! On May 21st, 2013, an angel of the Lord brought on these prophetic revelations of God to Prophet Benjamin Cousijnsen.

1 John 1, verse 5  This is the message which we have heard from him and announce to you, that God is light, and in him is no darkness at all.

Verily, verily, I tell you, It is impossible to escape the hand of God!

Verily, my name is Betuelsa and I am the messenger angel of God.

Verily, verily, the magnetic field around the earth will no longer protect the earth!
A very large solar flare will cause major damage. Because of this, even the satellites in space will lose their instruments, and be brought by this out of its orbit. Also many radio and GPS signals will be disrupted.

Read aloud: Wisdom 16, verse 17 to 19, and Genesis 19, verse 24, and 1 Kings 19, verse 11 and 12, and Job 37, verse 9, and Job 38, verse 7, and Job 37, verse 6, and Psalm 107, verse 25 to 31  I’ll start with
Wisdom 16, verse 17 to 19  Here it is written: The most amazing thing was that the fire burned all the more fiercely in the water, which usually puts fire out. All the forces of nature fight to defend those who are righteous. At one point the flames died down, so that they wouldn’t destroy the creatures sent to punish the ungodly. Those people had to learn that they were being overtaken by your judgment. But at another point, when surrounded by water, the flames burned more fiercely than fire had ever burned before, and so destroyed the crops on the land where those unrighteous people lived.
Genesis 19, verse 24  Here it is written: Then the LORD rained on Sodom and on Gomorrah sulfur and fire from the LORD out of the sky.
1 Kings 19, verse 11 and 12  Here it is written: He said, Go forth, and stand on the mountain before the LORD. Behold, the LORD passed by, and a great and strong wind tore the mountains, and broke in pieces the rocks before the LORD; but the LORD was not in the wind: and after the wind an earthquake; but the LORD was not in the earthquake: and after the earthquake a fire; but the LORD was not in the fire: and after the fire a still small voice.
Job 37, verse 9  Here it is written: Out of its chamber comes the storm, And cold out of the north.
Job 38, verse 7  When the morning stars sang together, And all the sons of God shouted for joy…
Job 37, verse 6  For he says to the snow, ‘Fall on the earth;’ Likewise to the shower of rain, And to the showers of his mighty rain.
Psalm 107, verse 25 to 31  Here it is written: For he commands, and raises the stormy wind, Which lifts up its waves. They mount up to the sky; they go down again to the depths. Their soul melts away because of trouble. They reel back and forth, and stagger like a drunken man, And are at their wits’ end. Then they cry to the LORD in their trouble, And he brings them out of their distress. He makes the storm a calm, So that its waves are still. Then they are glad because it is calm, So he brings them to their desired haven. Let them praise the LORD for his loving kindness, For his wonderful works for the children of men!
The messenger angel of God spoke further,

Verily, did God not say, Repent! and did He not warn you for what is coming?
Did you really not see then, that one hurts God deeply, by allowing into your soul that which is against nature? Verily, listen to this message!

By the Solar flares explosion, which came on earth, the electricity will get overloaded.
There will be a massive global power outage on the earth! Just at the time that there was already chaos, because of the Rapture, everything is upside down!

Verily!
God’s beloved Prophet Benjamin Cousijnsen has prayed for you, who’re listening, and asked for a way out and mercy for the lost. Verily, he who does not want to hear, will perish, also you who have heard the message. Save your life and go to Yeshua HaMashiach, Isa, Jesus Christ, and invite Him into your heart!

Read aloud: John 3, verse 16 to 20  Here it is written: For God so loved the world, that he gave his only begotten Son, that whosoever believes in him should not perish, but have everlasting life. For God sent not his Son into the world to condemn the world; but that the world through him might be saved. He that believes on him is not condemned: but he that believes not is condemned already, because he has not believed in the name of the only begotten Son of God. And this is the condemnation, that light is come into the world, and men loved darkness rather than light, because their deeds were evil. For every one that does evil hates the light, neither comes to the light, lest his deeds should be reproved.
The messenger angel of God spoke further,

Don’t be wise in your own eyes!
To reject Him, Jesus Christ, or to reject God’s Prophet of the last days, shall not be a blessing to you, spoke the messenger angel.