ARISE, AND DO NOT GO IN YOUR OWN STRENGTH, BUT PUT YOUR TRUST ON HIM! A MESSAGE FROM THE LORD, BROUGHT ON 100% AND WORD FOR WORD, IN THE NAME OF JESUS CHRIST, BY THE ANGEL OF THE LORD, MICHAËL! 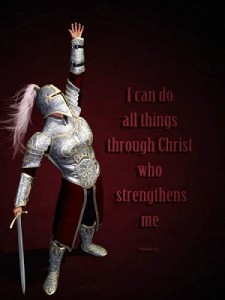 Hello, welcome! On October 11th, 2013, a messenger angel of God brought on this message of the almighty God, from the God of Abraham, Isaac and Jacob, word for word to end-time Prophet Benjamin Cousijnsen.

Shalom! I greet you in the almighty name of Yeshua HaMashiach, Isa, Jesus Christ of Nazareth. Verily, verily, I tell you, Hear attentively!

Luke 10, verse 19 and 20  Behold, I give unto you power to tread on serpents and scorpions, and over all the power of the enemy: and nothing shall by any means hurt you. However, this can not rejoice that the spirits are subject unto you, but rejoice that your names are written in heaven.
Verily, I am the messenger angel of God and my name is Michaël.

Verily, where is your faith, brave knight of God?
Arise, and do not go in your own strength, but put your trust in Him!

Deuteronomy 8, verse 15  who led you through the great and terrible wilderness, in which were fiery serpents and scorpions… so far.

Galatians 4, verse 9  But now that you have come to know God, or rather to be known by God, “Knight of God”, why do you turn back again to the weak and miserable elemental principles, to which you desire to be in bondage all over again?

Verily, I tell you, warrior of God,

Read aloud: Ephesians 6, verse 12 and 13  Here it is written: For our wrestling is not against flesh and blood, but against the principalities, against the powers, against the world’s rulers of the darkness of this age, and against the spiritual forces of wickedness in the heavenly places. Therefore, put on the whole armor of God, that you may be able to withstand in the evil day, and, having done all, to stand.

Revelation 9, verse 2 to 10  Here it is written: He opened the pit of the abyss, and smoke went up out of the pit, like the smoke from a burning furnace. The sun and the air were darkened because of the smoke from the pit. Then out of the smoke came forth locusts on the earth, and power was given to them, as the scorpions of the earth have power. They were told that they should not hurt the grass of the earth, neither any green thing, neither any tree, but only those people who don’t have God’s seal on their foreheads. They were given power not to kill them, but to torment them for five months. Their torment was like the torment of a scorpion, when it strikes a person. In those days people will seek death, and will in no way find it. They will desire to die, and death will flee from them. The shapes of the locusts were like horses prepared for war. On their heads were something like golden crowns, and their faces were like people’s faces. They had hair like women’s hair, and their teeth were like those of lions. They had breastplates, like breastplates of iron. The sound of their wings was like the sound of chariots, or of many horses rushing to war. They have tails like those of scorpions, and stings. In their tails they have power to harm men for five months.

Mark 16, verse 15 to 18  Here it is written: He said to them, “Go into all the world, and preach the Gospel to the whole creation. He who believes and is baptized will be saved; but he who disbelieves will be condemned. These signs will accompany those who believe: in my name they will cast out demons; they will speak with new tongues; they will take up serpents; and if they drink any deadly thing, it will in no way hurt them; they will lay hands on the sick, and they will recover.”

Verily, the almighty God is the Same today!
Do you think it is possible to cast out demons, heal the sick and raise the dead and to talk in foreign tongues? If so, do you have experience with this? If not, then why do you think, that it is no longer possible?

Matthew 10, verse 7 and 8  And as you go, preach, saying, The kingdom of heaven is at hand.Heal the sick, cleanse the lepers, raise the dead, cast out devils: freely you have received, freely give.

Verily, the belt of the armor represents Truth.
The breastplate represents Righteousness. And the shoes represent Preparedness to make known the good news. And the shield as an armor represents Faith. And the helmet represents Salvation. And the weapon, the sword, represents the Spirit, the word of God!
Verily, army of God, go into attack! When you are being put to the test, trust on Yeshua HaMashiach, Isa, Jesus Christ!

Read aloud: Matthew 5, verse 14 to 16  Here it is written: You are the light of the world. A city located on a hill can’t be hidden. Neither do you light a lamp, and put it under a measuring basket, but on a stand; and it shines to all who are in the house. Even so, let your light shine before men; that they may see your good works, and glorify your Father who is in heaven.

John 3, verse 16  Here it is written: For God so loved the world, that he gave his only begotten Son, that whosoever believes in him should not perish, but have everlasting life.