REVEALING, PROPHETIC MESSAGE OF GOD: THE ILLUMINATI WANTS THE REPLACEMENT OF THE HUMAN BEING, AND INTRODUCES THE WORLD WITH THE POSSIBILITIES, IN ORDER TO SPEED UP THE TOTAL CONTROL AND TAKEOVER OF MANKIND! 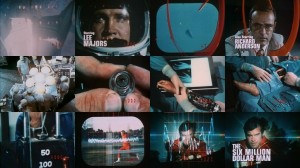 Hello, welcome! On April 29th, 2014, the following prophetic and revealing message of God was brought on to Prophet Benjamin Cousijnsen, which I’d like to share with you.

Shalom! I greet you, God’s beloved end-time Prophet. My name is Miranda and I am a messenger angel of God, and I am a warrior of your Rabbouni, your Lord Yeshua HaMashiach, Isa, Jesus Christ.

Verily, your world is called wonder world, and everything is already marked by total control and the total takeover of man.
Verily, even Prophet Benjamin, as a child in 1974, watched the TV series ‘The Six Million Dollar Man’. It was an American film series, and the role was played by Steve Austin, Lee Majors. In the series, this astronaut gets in a terrible accident and is almost dead. And, he gets rebuilt with the best of modern technology, which is called bionics, cybernetics. And his right arm, legs and left eye are replaced by bionic implants. He gets power, vision and speed, making him a superhuman.

Read aloud: Genesis 1, verse 27  God created man in his own image. In God’s image he created him; male and female he created them.
Genesis 2, verse 7  The LORD God formed man from the dust of the ground, and breathed into his nostrils the breath of life; and man became a living soul.
And verses 16 and 17  And the LORD God commanded the man, saying, “Of every tree of the garden you may freely eat: but of the tree of the knowledge of good and evil, you shall not eat of it: for in the day that you eat of it you will surely die”.

Verily, the total takeover of man has become a reality, even of animals!
Satan tries to replace everything, in humans and animals. There have already been many people replaced who are more machine than man! One even makes swarms, large groups of micro robotic bees, that are able to function both interactively with each other, as well as independently. These can even be used for military operations.

Verily!
The Illuminati wants the replacement of mankind, and introduces the world with the possibilities, in order to speed up the total control and takeover of man. Verily, also listen to the message of October 9, 2012, entitled: ‘One has lifelike human robots!’ Verily, one wants to be smarter than God! All this is the work of satan. Because if one is more robot and less human, or not human at all, then there is also no more feeling

Read aloud: Matthew 24, verse 12  Because iniquity will be multiplied, the love of many will grow cold.

Matthew 24, verses 13 and 14  But he who endures to the end, the same will be saved. This Gospel of the Kingdom will be preached in the whole world for a testimony to all the nations, and then the end will come.

Verily, also people are influenced through HAARP and Chip, and even other means.
Verily, the world is being influenced! Verily,

Read aloud: 1 Peter 5, verses 8 and 9  Be sober and self-controlled. Be watchful. Your adversary the devil, walks around like a roaring lion, seeking whom he may devour. Withstand him steadfast in your faith, knowing that your brothers who are in the world are undergoing the same sufferings.

Read aloud: John 3, verses 16 to 21  For God so loved the world, that he gave his only begotten Son, that whoever believes in him should not perish, but have eternal life. For God didn’t send his Son into the world to judge the world, but that the world should be saved through him. He who believes in him is not judged. He who doesn’t believe has been judged already, because he has not believed in the name of the only begotten Son of God. This is the judgment, that the light has come into the world, and men loved the darkness rather than the light; for their works were evil. For everyone who does evil hates the light, and doesn’t come to the light, lest his works would be exposed. But he who does the truth comes to the light, that his works may be revealed, that they have been done in God.
The messenger angel of God spoke further,

To accept Yeshua HaMashiach, Isa, Jesus Christ, offers you eternal life!
Verily, unexpectedly the plug will be pulled out, and then the end will be!
I’m going now, spoke the messenger angel of God, Ruacha, Yeshu, Shalom!