THE FOLLOWING REVELATIONS OF GOD, REVEALED IN THIS MESSAGE, TOOK PLACE PRIOR TO THE DARKNESS, THAT WAS ‘IN THE BEGINNING’ ON THE EARTH. IT WAS A HELL ON EARTH, AND GOD HAD A PLAN! 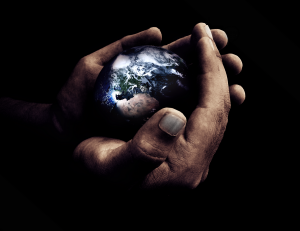 Hello, very welcome! On December 15th, 2014, a messenger angel of God brought on, word for word, the following message of God to end-time Prophet Benjamin Cousijnsen.

This day is again being revealed to you the following, by Prophet Benjamin Cousijnsen, God’s end-time Prophet and servant.
I am the messenger angel of God, Rafaël, and say to you: The veil is being opened! Verily, Prophet Benjamin, God tells and shows you:

Genesis 1, verse 2  Now the earth was formless and empty. Darkness was on the surface of the deep… so far.

Verily, a lot happened prior to the darkness that was on the earth!
Namely, that there were on the earth in the darkness, also fallen angels, who were in the darkness. They were wicked and had turned aside from God, and were proud and haughty, and had committed many transgressions. They were cast out of heaven. They lived on earth, and could not stand the light. They were like bats, and had, as well as them, razor-sharp teeth. They drank blood, which they drank from hell beings. God saw that it was not good, and that the earth was corrupt and dark. It was a hell on earth!

Jeremiah 32, verse 17  Ah Lord GOD! Behold, you have made the heavens and the earth by your great power and by your outstretched arm; there is nothing too wonderful for you.

And God had a plan.

Genesis 1, verse 3 and 4  And God said, “Let there be light,” and there was light. And God saw the light, and saw that it was good. And God divided the light from the darkness.

Verily, God was at work, and these angels perished.
God was hovering through the darkness and stretched out His arms, and plowed the ground and threw everything upside down! God did this with tremendous force!

Enoch, Chapter 2 to Chapter 5, verse 1 to 4  Observe everything that takes place in the heaven, how they do not change their orbits, and the luminaries which are in the heaven, how they all rise and set in order each in its season, and transgress not against their appointed order. Behold the earth, and give heed to the things which take place upon it from first to last, how steadfast they are, how none of the things upon earth change, but all the works of God appear to you. Behold the summer and the winter, how the whole earth is filled with water, and clouds and dew and rain lie upon it.
Observe and see how in the winter all the trees seem as though they had withered and shed all their leaves, except fourteen trees, which do not lose their foliage but retain the old foliage from two to three years till the new comes.
And again, observe the days of summer how the sun is above the earth over against it. And you seek shade and shelter by reason of the heat of the sun, and the earth also burns with glowing heat, and so you cannot tread on the earth, or on a rock by reason of its heat.
Observe how the trees cover themselves with green leaves and bear fruit: wherefore give heed and know with regard to all His works, and recognize how He that lives forever has made them so. And all His works go on thus from year to year for ever, and all the tasks which they accomplish for Him, and their tasks change not, but according as God has ordained so is it done. And behold how the sea and the rivers in like manner accomplish and change not their tasks from His commandments.
But you – you have not been steadfast, nor done the commandments of the Lord, but you have turned away and spoken proud and hard words with your impure mouths against His greatness. Oh, you hard-hearted, you shall find no peace.

Genesis 1, verse 9  And God said, “Let the waters under the sky be gathered together to one place, and let the dry land appear;” and it was so.

Verily, disobedience distracts you from God!
Also satan was the cause of it, that many angels had committed transgressions until he was thrown out, along with his worshipers!

Isaiah 14, verse 11 to 16  Your pomp is brought down to Sheol, with the sound of your stringed instruments. Maggots are spread out under you, and worms cover you. How you have fallen from heaven, morning star, son of the dawn! How you are cut down to the ground, who laid the nations low! You said in your heart, “I will ascend into heaven! I will exalt my throne above the stars of God! I will sit on the mountain of assembly, in the far north! I will ascend above the heights of the clouds! I will make myself like the Most High!” Yet you shall be brought down to Sheol, to the depths of the pit. Those who see you will stare at you. They will ponder you, saying, “Is this the man who made the earth to tremble, who shook kingdoms?”

Verily, this has been revealed to you today.
Ruacha, Yeshu, Shalom! spoke the messenger angel of God, and disappeared.