This is a revealing, warning and prophetic message from God, delivered to God’s only true, beloved Prophet of the end times, Benjamin Cousijnsen. (After clicking the video, wait for a moment until it plays.) 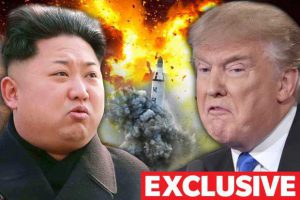 Hello, welcome! On May 10th, 2018, the messenger angel of God brought on the following message of God to Prophet Benjamin Cousijnsen, which I’d like to share with you.

Shalom! I greet you in the almighty Name of Yeshua HaMashiach, YHWH, Jesus Christ. Verily, my name is Kadesa, and I am a messenger angel of God.

Verily, Kim Jong-un, the leader of North Korea,
makes every effort to gather information by persuading Donald Trump to share confidential plans from Netanyahu, the President of Israel. For that, the leader of North Korea, Kim Jong-un, wants to become friends with Donald Trump. Together they play a stage performance, and satan is out to set up the countries against Israel, as Prophet Benjamin Cousijnsen has already revealed.

Iran is ready for an attack on Israel and to carry out attacks,
also on the United States of America, because Donald Trump supposedly supports Israel, but is out to war with Israel. Kim Jong-un indicated that Donald Trump is cunning, and that Syria and Iran hate Israel, as well as Kim Jong-un, the leader of North Korea! He said: “I’m not getting involved, because the best is for last”.

Verily, powers and forces are at work against Israel which remains unbeatable.
In Yeshua HaMashiach, YHWH, Jesus Christ, Israel is more than a conqueror! But, unfortunately, Israel must first repent from its idols and sinful ways! God will help Israel, if it turns to Him alone and shows remorse.