The rapid increase in Islamization is increasing worldwide. Also, this title indicates that both ISIS fighters and other Muslims are more visible in the street scene and government buildings! Read or listen to the entire message of God. (After clicking the video, wait for a moment until it plays.) 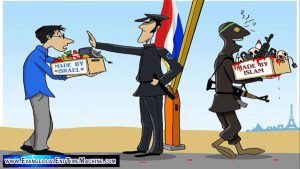 Hello, welcome! On May 12th, 2017, the messenger angel of God brought on this revealing message of God to end-time Prophet of the last days, Benjamin Cousijnsen.

Verily, in secret one is doing business with some of ISIS!
Verily, even many government leaders play as a spy, in which secret information is transmitted. And meanwhile, these spies are quietly also afraid of an attack on their family! I also reveal to you that the Islamic Turkish Hitler, Erdogan, wants to incite the Muslims worldwide to global attacks and takeover. Furthermore, more shops with halal products and clothing and others are also placed. The rapid increase in Islamization is increasing worldwide! Also, this title indicates that both ISIS fighters and other Muslims are more visible in the street scene and government buildings, and so on.

Also listen to the message that warns you, titled: ‘Everything has a reason!’
Verily, God warns you not to eat idol meat, which has been given to the idols for centuries. On May 6, 2014, one was already warned. But also today, 2017, one allows oneself to be tempted as a Christian, and joins in just as much, by also fully allowing the Islamization and being safe like that! But specifically Erdogan will be a major threat to Israel because they want to destroy Israel and America and Saudi Arabia!

The fallen angels are coming more and more to the forefront with their works because people don’t oppose it.
The tensions, and crime, and horror practices, and total takeover are increasing by the day! And we haven’t even mentioned that they eradicate the black population in South Africa because of the skin color.

Ephesians 6, verses 10 to 20  Finally, be strong in the Lord, and in the strength of his might. Put on the whole armor of God, that you may be able to stand against the wiles of the devil. For our wrestling is not against flesh and blood, but against the principalities, against the powers, against the world’s rulers of the darkness of this age, and against the spiritual forces of wickedness in the heavenly places. Therefore, put on the whole armor of God, that you may be able to withstand in the evil day, and, having done all, to stand. Stand therefore, having the utility belt of truth buckled around your waist, and having put on the breastplate of righteousness, and having fitted your feet with the preparation of the Gospel of peace; above all, taking up the shield of faith, with which you will be able to quench all the fiery darts of the evil one. And take the helmet of salvation, and the sword of the Spirit, which is the spoken word of God; with all prayer and requests, praying at all times in the Spirit, and being watchful to this end in all perseverance and requests for all the saints: on my behalf, that utterance may be given to me in opening my mouth, to make known with boldness the mystery of the Gospel, for which I am an ambassador in chains; that in it I may speak boldly, as I ought to speak.

Verily, my name is Revelado, a messenger angel of God.
Now is the time to arm yourself!
I’m going now, Ruacha, Yeshu, Shalom!