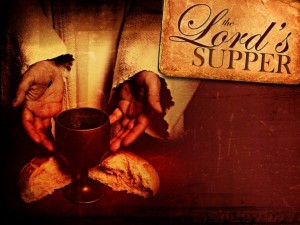 Hello, very welcome! On June 2nd, 2015, a messenger angel of God brought on, word for word, the following message of God to end-time Prophet Benjamin Cousijnsen.

Verily, on October 25, 2012, I brought you a message, which you can find back by typing, or pasting, the title into the search bar.
The title is: ‘I speak about the Holy Supper!’ And the second message is: ‘Before partaking in God’s Holiness of the Lord’s Supper!’ Verily, it is good to first listen to these messages, before you start with the Holy Supper in the church, or house group, or family. It is very good, after you know what the Lord’s Supper means, to start to take part in it once a month. Verily, keep in mind that God is holy, kadosh!

Wisdom, chapter 1, verse 1 to 16  ‘Seek wisdom and justice’ – You who judge the earth, love what is right. Set your mind on the Lord in goodness. Seek him with a sincere heart. Those who don’t put the Lord to the test will find him. He makes himself known to those who trust him. Perverse reasoning separates people from God. His power exposes the foolish people who test him. Wisdom will avoid a deceptive soul that plans evil. Wisdom won’t make her home in a body that is devoted to sin. A holy, instructive spirit will flee deceit and leave when ignorant people start to plot. It is ashamed to be found in the presence of wrongdoing. Wisdom is a spirit that wants only what is best for humans. Wisdom won’t declare blasphemers to be innocent because their own words convict them. God is witness to their thoughts. Truth examines the heart and hears what is said. The Lord’s Spirit fills the whole world. It holds everything together and knows what everyone says. Therefore, those who utter unjust words don’t escape notice. Justice will expose them and not pass them by. A proper inquiry will be made into the plots of ungodly people. News of their words will reach the Lord and make their lawless deeds known. God’s ear listens intently to everything anyone says. Murmurings can’t be kept secret for long. So guard against useless murmuring. Keep your tongue from speaking ill. Everything you say has some consequence, even if you think that you are speaking in private. A lying mouth destroys the soul. Don’t seek death through the error of your ways. Don’t invite destruction on yourself by what you do. God didn’t make death. God takes no delight in the ruin of anything that lives. God created everything so that it might exist. The creative forces at work in the cosmos are life-giving. There is no destructive poison in them. The underworld doesn’t rule on earth. Doing what is right means living forever. In spite of this, the ungodly called out to death by what they did and said. Thinking that death was their friend, they lost their resolve and made a treaty with death. Let them have each other: death and the ungodly belong together!

Verily, come before God in humility!
In 1984 there was a man and woman who were in a church and took part in a Holy Supper. Were they Christians?
No. And did they ask for forgiveness of their sins?
No! They would like to taste once what wine this was! Verily, they had no respect and ate the bread, the body of Christ, and said, “Bite Him dead really well; Jesus still lives!” they said together smiling. After the Holy Supper they suddenly broke down one by one in front of the church, and were killed instantly by a heart attack! Verily,

Titus 1, verse 15 and 16  To the pure, all things are pure; but to those who are defiled and unbelieving, nothing is pure; but both their mind and their conscience are defiled. They profess that they know God, but by their works they deny him, being abominable, disobedient, and unfit for any good work.

And Hebrews 4, verse 13  There is no creature that is hidden from his sight, but all things are naked and laid open before the eyes of him with whom we have to do.

And Colossians 2, verse 8  Be careful that you don’t let anyone rob you through his philosophy and vain deceit, after the tradition of men, after the elements of the world, and not after Christ.