If He, YHWH, gave His promise back then already, now how much more does this count for you, who are a step further from the Old Testament! Listen to or read this entire message of God attentively, and find out how you too can put God’s healing power into effect! 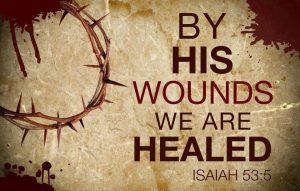 Matthew 18, verse 20  For where two or three are gathered together in my name, there I am in the midst of them.

Say: “Hallelujah!”
My name is Blesia, a messenger angel of God. Some still think Medieval, and believe that healing is not related to salvation. Even the Protestant churches believed this! Healing and salvation were separated. But when you read the Bible, you will discover that healing is included with the redeeming work of Yeshua HaMashiach, YHWH, Jesus Christ.

Who is your doctor?
Suppose one has diagnosed you, and has said to you: “Sir, or Madam, you have Parkinson’s!” and one declares you are ill. Then how do you answer in return?

Revelation 5, verse 13  I heard every created thing which is in heaven, on the earth, under the earth, on the sea, and everything in them, saying, “To him who sits on the throne, and to the Lamb be the blessing, the honor, the glory, and the dominion, forever and ever! Amen!”

Verily, it’s time that you start to use and apply the forces of God’s Kingdom in your life!
Think about this message. Healing is included in the covenant that God is having with you. Say: “Amen!”

And Exodus 15, verse 25 and 26 from: and there he tested them; and he said, “If you will diligently listen to the voice of the LORD your God, and will do that which is right in his eyes, and will pay attention to his commandments, and keep all his statutes, I will put none of the diseases on you, which I have put on the Egyptians; for I am the LORD who heals you”.

Verily, I repeat:
If you will diligently listen to the voice of the LORD your God… so far. This is what you, and every Christian, should do: listen and do what is right in His eyes, and live according to the will of God. For kadosh, holy is the Lord, and powerful! Incline your ear, and do what He tells you, if you incline to His commandments, and if you keep all His statutes. These are the conditions: if, if, if! Then He won’t impose any of the ailments on you. For I, the Lord, am your Healer. This is His promise towards His people!

Exodus 23, verse 25  You shall serve the LORD your God, and he will bless your bread and your water, and I will take sickness away from your midst.

Verily!
Alexander Dowie was an apostle, and believed that sickness was from hell, and believed that it did not belong among God’s people. Amen, hallelujah! It is good to proclaim and to confess. By the spoken Word, you will put the forces of the Kingdom of God into motion in doing so. Hallelujah! It does not only build up the hearing, oh no, but it also affects your whole being.

Psalm 103, verse 3  who forgives all your sins; who heals all your diseases.

Verily, now this is the God of Abraham, Isaac and Jacob, the God of Israel!
Verily, you may know: healing has been bought and paid for. The price has been paid to heal you, and that was no small price!

Isaiah 53, verse 4  Surely he has borne our sickness, and carried our suffering; yet we considered him plagued, struck by God, and afflicted.

Verily, He has borne your sins on the wooden cross, so that you would live in the righteousness.