APR 12, 2013  PROPHETIC REVELATION: TODAY, AN ANGEL WAS SENT TO BENJAMIN, GOD’S PROPHET, COMMISSIONED BY THE ALMIGHTY GOD, THE GOD OF ABRAHAM, ISAAC AND JACOB. I SAW THE NEW JERUSALEM! 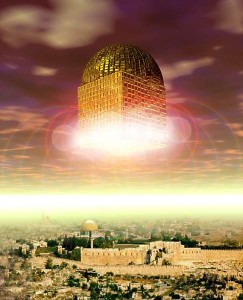 Hello, welcome! On April 12th, 2013, the messenger angel of God brought on this message to Benjamin Cousijnsen.

Shalom, Prophet Benjamin Cousijnsen! I greet you in the name of Yeshua HaMashiach, Jesus Christ. I am sent to you to follow me, God’s beloved Prophet. Come, arise and follow me.

I stood up and my body remained behind, and it seemed as if I was just still there.
I saw that the window and the wall had disappeared, and I followed the messenger angel of God. I had no idea where I was going… We flew through the sky, and the messenger angel of God flew above me and said: Benjamin, I’ll let you take shelter and you are hidden beneath my wings. Benjamin, you do know me, my name is Kadesa.

Look there! The invisible became visible, and I saw God’s Kingdom.

Read aloud: Revelation 21, verse 18 to 21  Here it is written: The construction of its wall was jasper. The city was pure gold, like pure glass. The foundations of the city’s wall were adorned with all kinds of precious stones. The first foundation was jasper; the second, sapphire; the third, chalcedony; the fourth, emerald; the fifth, sardonyx; the sixth, sardius; the seventh, chrysolite; the eighth, beryl; the ninth, topaz; the tenth, chrysoprasus; the eleventh, jacinth; and the twelfth, amethyst. The twelve gates were twelve pearls. Each one of the gates was made of one pearl. The street of the city was pure gold, like transparent glass.

Benjamin, this is the New Jerusalem, which is now ready.
I saw a beautiful city, full of sparkle! I was with the messenger angel of God on a kind of mountain. I could clearly see the city from above now. It did look like a square city. The towers and everything – that model of the New Jerusalem – was more beautiful than the Jerusalem of today; there is no comparison!

The messenger angel of God said, The old heaven will be no more, the new heaven is bigger.

Read aloud: Revelation 21, verse 1 to 2  Here it is written: I saw a new heaven and a new earth: for the first heaven and the first earth have passed away, and the sea is no more. I saw the holy city, the New Jerusalem, coming down out of heaven from God, made ready like a bride adorned for her husband.

Revelation 21, verse 3 to 8  Here it is written: I heard a loud voice out of heaven saying, “Behold, God’s dwelling is with people, and he will dwell with them, and they will be his people, and God himself will be with them as their God. He will wipe away from them every tear from their eyes. Death will be no more; neither will there be mourning, nor crying, nor pain, any more. The first things have passed away.”  He who sits on the throne said, “Behold, I am making all things new.” He said, “Write, for these words of God are faithful and true.”  He said to me, “It is done! I am the Alpha and the Omega, the Beginning and the End. I will give freely to him who is thirsty from the spring of the water of life. He who overcomes, I will give him these things. I will be his God, and he will be my son. But for the cowardly, unbelieving, sinners, abominable, murderers, sexually immoral, sorcerers, idolaters, and all liars, their part is in the lake that burns with fire and sulfur, which is the second death.”

Read aloud: Revelation 21, verse 23 to 27, and Revelation 22, verse 4 and 5
Revelation 21, verse 23 to 27  Here it is written: The city has no need for the sun, neither of the moon, to shine, for the very glory of God illuminated it, and its lamp is the Lamb. The nations will walk in its light. The kings of the earth bring the glory and honor of the nations into it. Its gates will in no way be shut by day for there will be no night there, and they shall bring the glory and the honor of the nations into it so that they may enter. There will in no way enter into it anything profane, or one who causes an abomination or a lie, but only those who are written in the Lamb’s book of life.
Revelation 22, verse 4 and 5  Here it is written: They will see his face, and his name will be on their foreheads. There will be no night, and they need no lamp light; for the Lord God will illuminate them. They will reign forever and ever.

Benjamin writes: I also saw new stars, and I saw that God had made everything over again, more beautiful!
You have to go back again, Benjamin. I, Kadesa, have to assist Gabriël now, in Israel.

Benjamin, on the earth they say, that the ATMs are being cracked each time.
Some have to say this on behalf of the Illuminati and the government, because they want humanity to make the choice and will say: “With the chip under the skin, I can buy and sell much more easily.”

Read aloud: Revelation 13, verse 16 to 18  Here it is written: He causes all, the small and the great, the rich and the poor, and the free and the slave, to be given marks on their right hands, or on their foreheads; and that no one would be able to buy or to sell, unless he has that mark, the name of the beast or the number of his name. Here is wisdom. He who has understanding, let him calculate the number of the beast, for it is the number of a man. His number is six hundred sixty-six.

Verily, Yeshua HaMashiach, Jesus Christ, says to you: It will allow you to have a commitment with satan himself, and you shall perish forever, whatever the consequences are!
Benjamin, we’re back. I’m going now… “Wait!” said Benjamin, “what about me?”
Together you can go singing, the messenger angel of God smiled. Just go sitting on Benjamin number two’s lap, and everything will be as it was again. Now fear not, it’s gonna be fine.
I sat down and said, “Yes, Shalom angel, here I am again!”
Well done, rascal, said the messenger angel of God.
I’m going now, God’s beloved simple Prophet, Ruacha, Yeshu, Shalom, Emanuel, Maranatha!