AUG 30, 2012  IN THIS DREAM VISION BENJAMIN IS LOCATED OUTSIDE THE CHURCH FIRST. AFTERWARDS BENJAMIN IS LOOKING AT THE INSIDE OF THE CHURCH, WHILE THE GOD OF ISAAC, JACOB AND ABRAHAM SPEAKS! 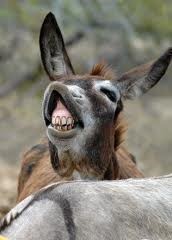 Hello! My name is Benjamin Cousijnsen. On August 30th, 2012, I had a very special dream vision. Just listen…

The Lord showed me a church from the outside…
looked very nice in my dream. Suddenly I was in the church! And I was expecting a room full of people, but it wasn’t.
Hereafter I suddenly stood on the pulpit, and looked into the room, and saw all donkeys walking amongst each other. Some donkeys stood in groups, shouting “Yes, yes!” amongst each other. Then I heard the voice of the Lord God, and He spoke this:

“These are all donkeys.”
“I, the Lord God, have spoken to many churches through my Prophet Benjamin, but they didn’t want to listen. They are similar as the donkeys, they don’t even listen to My voice. My people will perish for lack of knowledge. Many of these donkey’s think they are wise, and that they can stand above Me. You gossip about others and act like a donkey, and you think very much of yourself. But you don’t see, that I, the God of Abraham, Isaac and Jacob, am the true God, and stand above you. You should not play for God! And you should
not impose things on your sheep, which I have not spoken! Because you do not speak on behalf of Me. Also you should not impose your own church rules, because these are not of Me too! And you should also not force power over your sheep, which does not come from Me. I see you as donkeys, who will not inherit My Kingdom, unless they repent and listen to My voice, and do what I say.”

I saw, that many donkeys had spots…
I thought of a breeding sheep and something else. But a voice said, “Benjamin, those are the sins that I show you.”
“But there are so many”, I said. I heard sadness in His voice…
“These are donkeys, that I brought together in one church.”
That’s what the Lord spoke. “These think, that they are listening to My voice, but they are bound. They are gossip donkey’s, and smoking donkey’s, drugs donkey’s, addicted liquor donkey’s, and they still think that they speak on behalf of Me, and are full of My Spirit. Many have already been taken over, and many of them have also been guilty of idolatry, and listen to familiar spirits. Their church is full, full of powers and forces, that were not Mine. The fallen angels were among them, and many are similar already. Many are thinking they hear My voice, but it isn’t so, Benjamin. Almost all these donkeys have been guilty of adultery, prostitution, and many are also in possession of a hungry sex-demon and are full of unclean thoughts.”

“But this church is so full! Where are the good donkeys?” I asked.
“Those are also, here and there.”
“But there are so few,” I said.
“Like this, these donkeys of God’s house have made it a house of uncleanliness, and desecrated. They profane God’s house by worldly activities.”

“I show you this, in order to pass this on, Benjamin.”
“Those who do not repent, will have to deal with Me. I have let many people close their doors, and it will still continue. Do listen to your Prophet of God, and don’t judge. Listen to the truth and don’t fear this Prophet, but fear the God of Isaac, Jacob and Abraham.”

“Benjamin desires the good news for the churches.”
“He speaks, what I command him, either good news, either bad news. If you judge him, you judge your own Prophet, that I have given you, who needs to speak as I command to him and speak. He will do nothing with your words, because he listens to Me.”

Suddenly I was in another building… stunning!
‘I am seeing sheep now’, I thought. And that’s what I saw, very white ones! But there were so few.
“These are also leaders of the church; they are separated of the donkeys.”
I held my tears, but the Lord sounded proud of these sheep. But what a holy presence of God, I felt! “Benjamin”, He said, “I see your tears.”
“There are so few,” I said.
“There will be just a few like these, who also respect and love you. They are thankful, what God has given. These also support you, with prayer for you and your workers. Whoever blesses My Prophet, will be blessed. And whoever judges him, judges Me.”