Prophetic, informative, warning and revealing message of God, coming 100% from YHWH, the God of Abraham, Isaac and Jacob, and Prophet Benjamin Cousijnsen. A) Verily, some who were laughing so much at that time about those prophetic messages of Prophet Benjamin Cousijnsen, have now lost their home, because of disobedience and not being willing to listen. And God has turned a deaf ear to their properties! B) Hear what countries the Lord is going to strike due to disobedience! C) Two important revelations are passed on. Listen in the message, what will happen between December 7 and 30, 2015! 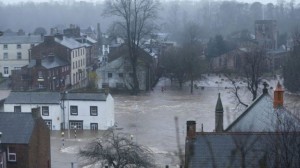 Hello, welcome! On December 7th, 2015, the angel of the Lord brought on this prophetic, revealing and informative warning of God to end-time Prophet of the last days, Benjamin Cousijnsen, commissioned by the almighty God, YHWH, the God of Abraham, Isaac and Jacob.
Shalom! My name is Thunder and I am a messenger angel of God.

Verily, Great Britain!
You have ignored God’s warnings, and God has opened the heavenly floodgates! Both for Northern England and Southern Scotland, your rivers have burst their banks. Don’t say that you didn’t know anything about it. Because you were warned from 2012 up to 2015, among others, in the messages with the following titles: ‘Now there is no more grace and I warn you seriously!’ The fulfillment of this prophecy from September 17, 2013, is now in full swing.

Verily!
Some, who were laughing so much at that time about those prophetic messages of Prophet Benjamin Cousijnsen, have now lost their home, because of disobedience and not being willing to listen. And God has ignored and washed away their properties!

Verily, I reveal to you:
Between now, December 7, until December 30, 2015, I, Thunder, will strike in several places, commissioned by the Almighty, and visit you unexpectedly! I will make the ground tremble and drown your idols! Verily, repent, Iceland, Alaska, Northern and Southern England, Scotland, Indonesia, Philippines, Mexico, India, America, Africa, Spain, Turkey and Afghanistan! Verily, realize very well, that if Prophet Benjamin Cousijnsen had not so often asked for mercy and delay, then many countries, such as the Philippines and Indonesia, would already no longer exist. Verily, just like the weather can change suddenly, so can I, Thunder, strike unexpectedly.

Also, between December 7 up to December 30, 2015, you will witness a major attack, which will also be on the news.
Verily, worldwide, God will allow a large amount of water to fall!

I also reveal to you: 2016 is a year of disasters, with even more violence and attacks and wars!
Verily, all that has been revealed is in full swing! Repent while you still can.

1 Peter 1, verse 10  Concerning this salvation, the Prophets sought and searched diligently, who prophesied of the grace that would come to you.

And Revelation 22, verse 6  He said to me, “These words are faithful and true. The Lord God of the spirits of the Prophets sent his angel to show to his bondservants the things which must happen soon”.
And verse 20 and 21  He who testifies these things says, “Yes, I come quickly.” Amen! Yes, come, Lord Jesus. The grace of the Lord Jesus Christ be with all the saints. Amen.