A MESSAGE OF GOD: THE MESSENGER ANGEL RAFAËL BRINGS ON, WORD FOR WORD, THIS SPECIAL AND STRIKING MESSAGE IN IMAGERY TO PROPHET BENJAMIN COUSIJNSEN, IN THE NAME OF THE LORD JESUS CHRIST, ON BEHALF OF THE LORD GOD, THE GOD OF ABRAHAM, ISAAC AND JACOB. USING BIBLICAL SCRIPTURES AND THE STORY OF LITTLE RED RIDING HOOD, BOTH THE SIMILARITIES AND THE BIG DIFFERENCE CAN BE GRADUALLY AND CLEARLY HEARD & READ IN THIS MESSAGE BETWEEN THE FAIRY TALE AND THE FULL TRUTH OF GOD! 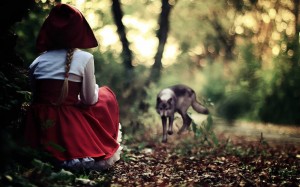 Hello, very welcome! On November 17th, 2014, the following message of God was brought on in imagery, by a messenger angel of God, to end-time Prophet Benjamin Cousijnsen.

Shalom! I greet you in the wonderful name of Yeshua HaMashiach, Jesus Christ. Verily, my name is Rafaël and I am the messenger angel of God.

Verily, the symbolic background of the wolf in Greece is, that the wolf was sacred in the worship service of idols for Apollo.
The animal stood for guidance and protection by intuition. The wolf was also known in the Scandinavian tradition for Odin, Wodan, the precursor of Saint Nicolas!

Luke 10, verse 3  Go your ways. Behold, I send you out as lambs among wolves.

Verily, a wolf in sheep’s clothing also means a dangerous person, who pretends to be nicer.

Matthew 10, verse 16  Behold, I send you out as sheep in the midst of wolves. Therefore be wise as serpents, and harmless as doves.

John 10, verse 8  All who came before me are thieves and robbers, but the sheep didn’t listen to them.
And verse 27 to 30 My sheep hear my voice, and I know them, and they follow me. I give eternal life to them. They will never perish, and no one will snatch them out of my hand. My Father, who has given them to me, is greater than all. No one is able to snatch them out of my Father’s hand. I and the Father are one.

Verily, the wolf can also be a Christian!

Matthew 7, verse 16  By their fruits you will know them. Do you gather grapes from thorns, or figs from thistles?

Acts 20, verse 29  For I know that after my departure, vicious wolves will enter in among you, not sparing the flock.

Verily, wolves are sneaky.
They look first to the prey. He or she wins the confidence, and then the wolf rises, in order to attack, in which innocent victims perish with him! Verily, now think once of the fairy tale ‘Little Red Riding Hood’, who went to her grandmother.

Little Red Riding Hood had to stay on that narrow way, but instead chose for it to go through the forest.

Her mother had warned her só for the big, bad wolf!

John 15, verse 16  You didn’t choose me, but I chose you, and appointed you, that you should go and bear fruit, and that your fruit should remain; that whatever you will ask of the Father in my name, he may give it to you.

And so Little Red Riding Hood encountered that cunning wolf.

Psalm 92, verse 6  A senseless man doesn’t know, neither does a fool understand this.
Psalm 91, verse 11 to 16  For he will put his angels in charge of you, to guard you in all your ways. They will bear you up in their hands, so that you won’t dash your foot against a stone. You will tread on the lion and cobra. You will trample the young lion and the serpent underfoot. “Because he has set his love on me, therefore I will deliver him. I will set him on high, because he has known my name. He will call on me, and I will answer him. I will be with him in trouble. I will deliver him, and honor him. I will satisfy him with long life, and show him my salvation.”

Galatians 6, verse 7  Don’t be deceived. God is not mocked, for whatever a man sows, that he will also reap.

The bad wolf held a contest with Little Red Riding Hood, and was the first to arrive to her grandmother, and ate her up.

And the hunter… he saved Red Riding Hood and her grandmother from the belly of the wolf!

Acts 17, verse 32  Now when they heard of the resurrection of the dead, some mocked; but others said, “We want to hear you again concerning this”.

And also I say to you, Ruacha, Yeshu, Shalom! God bless
Note: Full text display for the deaf, hearing impaired and speakers of other languages
Use Google Translate and Bookmark it.
Dear people, spread these messages! Translators in different languages are welcome