Warning message of God: Do not allow yourself to be pulled along into the worldly music, but give God what belongs to Him! The messenger angel of God spoke on behalf of Yeshua HaMashiach: world artists, without a relationship in their lives with Yeshua HaMashiach, Jesus Christ, are pulling many into the abyss with their singing, and especially with the characteristics of Lucifer, satan! 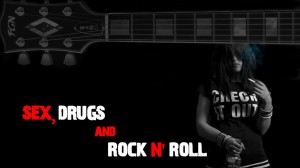 Hello, welcome! On March 12th, 2015, a messenger angel of God brought on word for word the following message to end-time Prophet Benjamin Cousijnsen, commissioned by the almighty God, the God of Abraham, Isaac and Jacob.

Shalom! I greet you in the wonderful name of Yeshua HaMashiach, Jesus Christ. Verily, my name is Gidori, a messenger angel of God.

Verily, the best misleading and contaminating music ever can be found in the world!
Verily, no singer, or female singer, or highly educated person can fight this master in the music, so it seems. By pride and arrogance and rebellion, this cherub, Lucifer, was cast out of heaven. And since then, he is using his music against God! Many on earth have become contaminated. It started with a good appearance and neat clothes… until the mouth opened, the mouth of the dragon!

Revelation 13, verse 6  He opened his mouth for blasphemy against God, to blaspheme his name, and his dwelling, those who dwell in heaven.

Verily, that for which God intended the music, can only be found in a child of God.
Also listen to the message, entitled: ‘Revelation of God: Rhythmic hellish Beat music!’ and the message: ‘Music of deception!’ Verily,

Verily, many songs are, among other things, about hate, sex and drugs!
Verily,

1 John 3, verse 7 to 9  Little children, let no one lead you astray. He who does righteousness is righteous, even as he is righteous. He who sins is of the devil, for the devil has been sinning from the beginning. To this end the Son of God was revealed, that he might destroy the works of the devil. Whoever is born of God doesn’t commit sin, because his seed remains in him; and he can’t sin, because he is born of God.

Verily, the evil spirits flee at praise and worship!
In there are love and God’s power and blessings. It is a total package that ensures you for eternal life!

Verily, sing and play for your only Rabbouni, Yeshua HaMashiach, Jesus Christ!
He makes you happy. Then also give Him what belongs to Him, and give satan what belongs to him, namely his defeat. Amen! A violin or a harp or guitar can work wonders.
I’m going now, Ruacha, Yeshu, Shalom! spoke the messenger angel of God, and disappeared.