Halloween is more than an exciting party and all about the money. It has to do with demonic rituals and the occult, fully 100%! 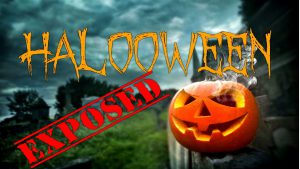 Hello, welcome! On October 26th, 2016, the messenger angel of God brought on, word for word, the following message to Prophet Benjamin Cousijnsen.

Verily, earth’s inhabitants, listen attentively!
You love to get creeped out and Halloween and blasphemous mocking horror, and enjoy that someone is scared to death. On March 20, 2015, I, Bazouleur – that’s my name – a messenger angel of God, brought you the message entitled: ‘Left behinds end up in a real horror world!’

Verily, Prophet Benjamin Cousijnsen has told and revealed to you more often, what is behind all that scaring!
The God of Abraham, Isaac and Jacob, and of Prophet Benjamin Cousijnsen, has already warned the world so often. And on February 24, 2016, God once again sent a messenger angel, in order to warn the world, in the message entitled: ‘It’s time not to allow yourself to be taken over while you still can!’ Certainly listen, because the total takeover has already long ago revealed itself. And the hellish violence, that which is also seen in scary and horror movies, is becoming a reality more and more in the world!

Now to you the following question, earth’s inhabitants:
Do you enjoy to go down the street unsafely, and to be jumped upon by a clown gone mad and taken over, or some kind of creep who really goes after you with a chainsaw, and wants to murder you?

Since 2012 everything is increasing…
what one liked in horror movies and scary movies, Prophet Benjamin Cousijnsen had told you yet. Day by day, the earth’s inhabitants are pulling the darkness more and more to themselves, the spiritual world of satan, and they encourage both the adults and the children. Some children say: “Mommy, may I be a monster?” And indeed, their character is being affected, because they open themselves to the darkness, and the child becomes a monster inside! And then one wonders why there are so many problems and horror and violence. Verily, repent, and leave the darkness alone!

Halloween is 100% out of evil!
It is more than an innocent, exciting party and all about the money. It has to do 100% with demonic rituals and the occult. The more insane something is, the better it is for satan! Repent and ask Yeshua HaMashiach, YHWH, Jesus Christ, for forgiveness, and stop with it, for good!

John 3, verse 16 to 21  For God so loved the world that he gave his one and only Son, that whoever believes in him shall not perish but have eternal life. For God did not send his Son into the world to condemn the world, but to save the world through him. Whoever believes in him is not condemned, but whoever does not believe stands condemned already because they have not believed in the name of God’s one and only Son. This is the verdict: Light has come into the world, but people loved darkness instead of light because their deeds were evil. Everyone who does evil hates the light, and will not come into the light for fear that their deeds will be exposed. But whoever lives by the truth comes into the light, so that it may be seen plainly that what they have done has been done in the sight of God.