Don’t allow yourself to be influenced by evil, including through TV and media. Satan wants to influence and take over everyone, especially the Christians! (After clicking the video, wait for a moment until it plays.) 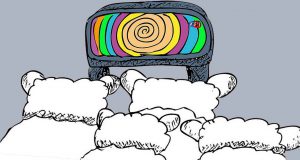 Welcome! On December 19th, 2017, the messenger angel of God brought on the following message to end-time Prophet Benjamin Cousijnsen.

Verily, my name is Revelado, a messenger angel of God.

The wickedness and the total takeover of man are increasing by the day!
And one almost doesn’t want to know anything of the truth, nor accept it. But one is open to the kingdom of the darkness, and allows oneself to be influenced by, among other things, television and media. And before one knows it, one thinks the same as the wicked or the characters of the television series, including murder and sex and adultery, where everything is covered in order to influence your memory – as you can see and hear in the television series – and to persuade you into their way of ungodliness and thinking. Verily, satan wants to influence and take over everyone, especially the Christians!

Romans 1, verses 24 to 29  Therefore God also gave them up in the lusts of their hearts to uncleanness, that their bodies should be dishonored among themselves, who exchanged the truth of God for a lie, and worshiped and served the creature rather than the Creator, who is blessed forever. Amen. For this reason, God gave them up to vile passions. For their women changed the natural function into that which is against nature. Likewise also the men, leaving the natural function of the woman, burned in their lust toward one another, men doing what is inappropriate with men, and receiving in themselves the due penalty of their error. Even as they refused to have God in their knowledge, God gave them up to a reprobate mind, to do those things which are not fitting; being filled with all unrighteousness, sexual immorality, wickedness, covetousness, maliciousness; full of envy, murder, strife, deceit, evil habits, secret slanderers.

Verily, if only you knew how many have been allowing themselves to be influenced by means of media hypnosis, whereby marriages and families have been destroyed by satan.
Verily, guard your eyes and heart and mind! Therefore you are without excuse, O man. Verily, don’t allow yourself to go astray in your strength and faith, but consider the wickedness in the media reprehensible. And don’t defile yourself because the works of satan are cunning and familiar! He has set out his safety net in order to enchant and capture you. Verily, seek the things that are from above, and be vigilant, so that you don’t allow yourself to be defiled through the media and what it has to offer you!

John 10, verses 6 to 8  Jesus spoke this parable to them, but they didn’t understand what he was telling them. Jesus therefore said to them again, “Most certainly, I tell you, I am the sheep’s door. All who came before me are thieves and robbers, but the sheep didn’t listen to them”.
And John 3, verses 16 to 21  For God so loved the world, that he gave his one and only Son, that whoever believes in him should not perish, but have eternal life. For God didn’t send his Son into the world to judge the world, but that the world should be saved through him. He who believes in him is not judged. He who doesn’t believe has been judged already, because he “or she” has not believed in the name of the one and only Son of God. This is the judgment, that the light has come into the world, and men loved the darkness rather than the light; for their works were evil. For everyone who does evil hates the light, and doesn’t come to the light, lest his “or her” works would be exposed. But he who does the truth comes to the light, that his “or her” works may be revealed, that they have been done in God.

Guard your eye, guard your eye for what you see!
See through that snake!
I’m going now, spoke the messenger angel of God, Ruacha, Yeshu, Shalom!