A powerful warning against soothsaying, magic and magical power, since the source is from satan. Maybe this is your last chance, to turn away from every occult practice! 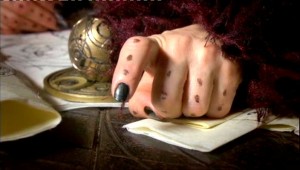 Hello! This vision was given to Benjamin Cousijnsen on May 9th, 2012.

Benjamin, write this down, what I have to say to you.
“Where am I?”
Just look around you…
“This looks like a hut,” I said.
Write everything down over there.

I saw a feather and old paper…
I walked up there and did as the angel commissioned. I asked again, “Where am I?”
First write down, what I’m going to say to you, said the angel, write down…

When people turn away from the only true God, and turn to the false gods, then God says: This is spiritual adultery.
They also must not think that they will be blessed.

Acts 16, verse 16 to 18  Here it is written: It happened, as we were going to prayer, that a certain girl having a spirit of divination met us, who brought her masters much gain by soothsaying. Following Paul and us, she cried out, “These men are servants of the Most High God, who proclaim to us the way of salvation!” She was doing this for many days. But Paul, becoming greatly annoyed, turned and said to the spirit, “I charge you in the name of Jesus Christ to come out of her!” It came out that very hour.
The angel of God spoke further,

Someone went to a fortune-teller…
Her predictions, of Annie, were so positive, especially when this fortune-teller spoke about her deceased aunt. She had a lump in her throat; how great she was!
There are more than 50.000 soothsayers in Paris, said the angel, and gave:

Revelation 21, verse 8  But for the cowardly, unbelieving, sinners, abominable, murderers, sexually immoral, sorcerers, idolaters, and all liars, their part is in the lake that burns with fire and sulfur, which is the second death.

Many were deceived by their sorcery, including many children of God.
A woman once made an appointment with a soothsayer. This man had a room in the Hasseltse Bosch Street. She made an appointment with the soothsayer. First they drank something together, because he proposed that to her first. This lady was being intoxicated and assaulted, and she filed a complaint with the police.
God calls out: Do not deviate!

Proverbs 7, verse 25 to 27  Here it is written: Don’t let your heart turn to her ways. Don’t go astray in her paths, For she has thrown down many wounded. Yes, all her slain are a mighty army. Her house is the way to Sheol, Going down to the chambers of death.

God demands that we walk by faith, not by sight!

2 Corinthians 5, verse 7  For our life is a matter of faith, not of sight.

The word ‘sorcery’ in Greek means: drugs, and many have been destroyed by the magic power of satan.

Revelation 21, verse 8  But for the cowardly, unbelieving, sinners, abominable, murderers, sexually immoral, sorcerers, idolaters, and all liars, their part is in the lake that burns with fire and sulfur, which is the second death.
The angel spoke further,

And this is their portion, speaks God.
Wilburn was an American. He predicted his own future with cards. Everything came out, and also for others. He also discovered that many got divorced among others.
He found Jesus Christ in his life. He warned against the danger of all occult practices!

The source of the soothsayers is the source of satan!
By this, some have death experiences and suicidal thoughts.
Many marriages have been destroyed.
Many believe to have a gift, but they forget that satan is the father of lies.

Deuteronomy 18, verse 10 to 14  There shall not be found with you anyone who makes his son or his daughter to pass through the fire, one who uses divination, one who practices sorcery, or an enchanter, or a sorcerer, or a charmer, or a consulter with a familiar spirit, or a wizard, or a necromancer. For whoever does these things is an abomination to the LORD: and because of these abominations the LORD your God does drive them out from before you. You shall be perfect with the LORD your God. For these nations, that you shall dispossess, listen to those who practice sorcery, and to diviners; but as for you, the LORD your God has not allowed you so to do.

They exchanged the truth about God for a lie!

Romans 1, verse 25  Who exchanged the truth of God for a lie, and worshiped and served the creature rather than the Creator, who is blessed forever. Amen.

God makes clear to you, that these are the works of their flesh.
Every soothsaying, idolatry, sorcery, and wicca, is also idolatry, said the angel, and gave:

Hebrews 9, verse 27  And as it is appointed unto men once to die, but after this the judgment.

Repent! spoke the angel, and gave:

Leviticus 19, verse 26, and Ezekiel 13, verse 6 and 7  Here it is written: You shall not eat anything with the blood: neither shall you use enchantment, nor observe times.
They have seen falsehood and lying divination, who say, the LORD says; but the LORD has not sent them: and they have made men to hope that the word would be confirmed. Haven’t you seen a false vision, and haven’t you spoken a lying divination, in that you say, the LORD says; but I have not spoken?
The angel of God spoke further,

There are many doors, and gave:

2 Kings 21, verse 6 and 7  He made his son to pass through the fire, and observed times, and used enchantments, and dealt with those who had familiar spirits, and with wizards: he worked much evil in the sight of the LORD, to provoke him to anger. He set the engraved image of the grove, that he had made, in the house of which the LORD said to David and to Solomon his son, In this house, and in Jerusalem, which I have chosen out of all the tribes of Israel, will I put my name forever.

John 10, verse 9  I am the door. If anyone enters in by me, he will be saved, and will go in and go out, and will find pasture.
John 14, verse 6  Jesus said to him, I am the way, the truth, and the life. No one comes to the Father, except through me.

Maybe this is your last chance!
I say again: God says that you get yet one chance, to turn away from your devilish practices! How many lives have you already destroyed?

Hebrews 9, verse 27  And as it is appointed unto men once to die, but after this the judgment.
The angel of God spoke further,

The best gift of God is eternal life.
This is what you’ll get in return! You’ll receive this in Jesus Christ.

Romans 6, verse 23  For the wages of sin is death, but the free gift of God is eternal life in Christ Jesus our Lord.

The angel also spoke, Jesus says also: John 8, verse 12  Here it is written: Again, therefore, Jesus spoke to them, saying, I am the light of the world. He who follows me will not walk in the darkness, but will have the light of life.

The angel repeated these words of Jesus: I am the light of the world. He who follows Me will not walk in the darkness, but will have the light of life.
Open your other door, the door of your heart! Jesus Christ wants to forgive you. He is mightier than satan. His name already contains power!
Close your eyes and repent; it’s not too late. Go to an evangelical church, where they will pray together with you, but don’t wait!

Benjamin, the time is near, God is calling; but he who does not want to hear, will perish.
Many say: “God is love”.
Yes, for so long already! But He punishes, in order to show you that you must not play games anymore with Him. Make your choice and ponder this and God will touch you.
Benjamin, rest again in your bed.

“Wait,” I said, “where was I?”
The angel said, on the island of Patmos, where John was, and this was his place.

Finally, Benjamin, soothsayers take advantage of the crisis, but satan of them!
Jesus Christ is the only Way to salvation.
Benjamin, after writing it down, your head will be empty again, as it was. All this came from the Almighty, who speaks to man in these dark days!

Behold, the moon… behold, the stars! Where are they?
Everything will pass away, but there will come a new Earth for the children of God.