JULY 2, 2013  A MESSAGE OF GOD, BROUGHT BY RAFAËL, WHO ON BEHALF OF THE LORD GOD, THE GOD OF ABRAHAM, ISAAC AND JACKOB, WAS SENT TO BERNESE OBERLAND, IN ORDER TO INTERVENE! 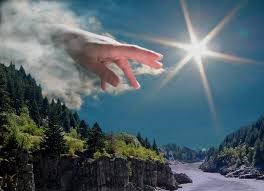 Hello, welcome! In the evening on July 2nd, 2013, the angel of the Lord brought on this message of God to Benjamin Cousijnsen.

Shalom! I greet you in the name of Yeshua HaMashiach, Jesus Christ. Verily, verily, I tell you, I am the messenger angel of God and my name is Rafaël.

Verily, in the Bernese Oberland, I, Rafaël, met a young man.
His name was Barnie. I knew him well, but he did not know me.
Barnie said, “Sir, what are you doing? Are you crazy? Get your hands off my stuff, leave those boxes, or I’ll…”
Yes, I just looked at him, and he was as meek as a lamb.
“Where are you from?” asked Barnie.
I am an Israelite and I’m looking for work.
“I’ve got a job for you, as a mail deliverer. But then you do have to know streets. Do you have a little experience?” asked Barnie.
Yes, I know all the houses and roads and have already been everywhere, all over the world.
“Come, have a cup of coffee,” said Barnie, “then we’ll talk further there.”

Verily, Barnie told me that he was a wizard.
Proudly, he told me he was also a member of a coven of witches, and that he came together with 13 members, in order to worship the gods.
How much power do you have? I, Rafaël, asked.
“Well, I use black magic. In that way I can convey painful growths to someone. I even once set a house on fire with a spell. And I can make myself invisible and make a bird drop dead from the sky, and I can predict the future!”
And I, Rafaël, I said, am here to predict your future.
“Are you then also a wizard?”
No, I said, a demon expeller! I look them up, when the almighty God of Abraham, Isaac and Jacob gives me the order. Then I go down there in His power and might, and will chase the demons and overpower them, and will tie them up.
“Then who are you?” asked Barnie.
Your nightmare, I, Rafaël, said. Thus it is written:

Leviticus 19, verse 26  Here it is written: You shall not eat any meat with the blood still in it; neither shall you use enchantments, nor practice sorcery.
And verse 29  Don’t profane your daughter, to make her a prostitute; lest the land fall to prostitution, and the land become full of wickedness.
And verse 31  Don’t turn to those who have familiar spirits, nor to the wizards. Don’t seek them out, to be defiled by them. I am the LORD your God.
Leviticus 20, verse 6  Here it is written: The person that turns after such as have familiar spirits, and after wizards, to play the prostitute after them, I will even set my face against that person, and will cut him off from among his people.

Revelation 21, verse 8  Here it is written: But for the cowardly, unbelieving, sinners, abominable, murderers, whoremongers, sorcerers, idolaters, and all liars, their part is in the lake that burns with fire and sulfur, which is the second death.

Barnie cried, “Stop it!”
Then I revealed myself as the messenger angel of God.
Barnie had had so many chances, and had so often rejected Yeshua HaMashiach, that the demons spoke through him. He’d been so taken over, that his soul was replaced by the fallen angels! I said:

Exodus 22, verse 18  Here it is written: You shall not allow a sorceress to live.

And immediately he dropped down dead!
Verily, God is a swift witness and is more than a conqueror.
Wizards and you, who practices witchcraft: God hates the works of satan! and will cast also you into the lake of fire. This is my and God’s prediction, and that one comes true. Repent, and break with it! Accept Yeshua HaMashiach, Jesus Christ, and beg for forgiveness, before it’s too late.

John 3, verse 16 and 17  Here it is written: For God so loved the world, that he gave his only begotten Son, that whosoever believes in him should not perish, but have everlasting life. For God sent not his Son into the world to condemn the world; but that the world through him might be saved.