A message of God: Verily, some claim that there are no animals in heaven. On the basis of the Biblical scriptures in God’s messages, you will discover the truth. Furthermore, the angel of God tells about a special event of the then little Benjamin Cousijnsen! 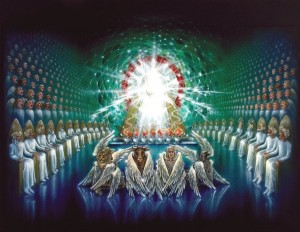 Hello, very welcome! On January 16th, 2015, the following message was brought on word for word by an angel of the Lord, a messenger angel of God, to end-time Prophet Benjamin Cousijnsen.

Revelation 4, verse 6 to 9  Before the throne was something like a sea of glass, similar to crystal. In the midst of the throne, and around the throne were four beasts full of eyes before and behind. The first beast was like a lion, and the second beast like a calf, and the third beast had a face like a man, and the fourth beast was like a flying eagle. The four beasts, each one of them having six wings, are full of eyes around and within. They have no rest day and night, saying, “Holy, holy, holy is the Lord God, the Almighty, who was and who is and who is to come!” When those beasts give glory, honor, and thanks to him who sits on the throne, to him who lives forever and ever.

Verily, some say and claim that there are no animals in heaven.
If that were true, then there were no animals at God’s throne, and they would not bring thanks, and God’s holy Scriptures would be a lie! Verily, Prophet Benjamin Cousijnsen, God’s beloved servant, has seen many animals. Just listen once to the message: ‘Revelations in the heavenly animal paradise!’ and to the message: ‘This is not science fiction!’ and the message: ‘This is reality and a warning of God!’ In this last message, Prophet Benjamin experienced, that in the waters of heaven were also various types of creatures. Verily,

Verily, God loves animals, and made the animals yet before man, because God knew that an animal is more reliable than a man.
Yet God loves man!

John 3, verse 16 to 20  For God so loved the world, that he gave his one and only Son, that whoever believes in him should not perish, but have eternal life. For God didn’t send his Son into the world to judge the world, but that the world should be saved through him. He who believes in him is not judged. He who doesn’t believe has been judged already, because he has not believed in the name of the one and only Son of God. This is the judgment, that the light has come into the world, and men loved the darkness rather than the light; for their works were evil. For everyone who does evil hates the light, and doesn’t come to the light, lest his works would be exposed.

Verily, Yeshua HaMashiach, Jesus Christ, wants to give you eternal life and let you enjoy all the beauty, that He created in heaven!
So there are animals in heaven, and God said it was good.
I’m going now, Ruacha, Yeshu, Shalom! spoke the angel of the Lord, the messenger angel of God, and disappeared.