Therefore one must not think that they are gods nor call them gods, for they are not able either to decide a case or to do good to men. (After clicking the video, wait for a moment until it plays.) 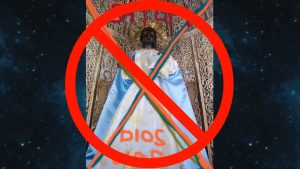 Shalom! I greet you in the almighty Name of Yeshua HaMashiach, YHWH, Jesus Christ. Verily, my name is Rafaëla, a messenger angel of God.

Colossians 2, verses 4 and 5  I tell you, then, do not let anyone deceive you with false arguments, no matter how good they seem to be. For even though I am absent in body, yet I am with you in spirit, and I am glad as I see the resolute firmness with which you stand together in your faith in Christ.

Verily, and how firm do you stand together; how firm are you?
How is your firmness?

Colossians 2, verses 6 and 7  So live in Christ Jesus the Lord in the same way as you received him. Be rooted and built up in him, be established in faith, and overflow with thanksgiving just as you were taught.

How is your walk, and how deep and strong are your roots in Yeshua HaMashiach, YHWH, Jesus Christ?
Be vigilant for false teachers and so-called prophets, with their false predictions and calculations! Thus there are numerous false pastors and other church leaders and evangelists who have not been chosen by God, but by satan, the deceiver. And they have appointed themselves.

Colossians 2, verses 8 to 15  See to it that nobody enslaves you with philosophy and foolish deception, which conform to human traditions and the way the world thinks and acts rather than Christ. All the fullness of deity lives in Christ’s body. And you have been filled by him, who is the head of every ruler and authority. You were also circumcised by him. This wasn’t performed by human hands — the whole body was removed through this circumcision by Christ. You were buried with him through baptism and raised with him through faith in the power of God, who raised him from the dead. When you were dead because of the things you had done wrong and because your body wasn’t circumcised, God made you alive with Christ and forgave all the things you had done wrong. He destroyed the record of the debt we owed, with its requirements that worked against us. He canceled it by nailing it to the cross. When he disarmed the rulers and authorities, he exposed them to public disgrace by leading them in a triumphal parade.

Verily, don’t allow yourself to be led by people, but by the Holy Spirit of God!
Verily, in Him you have been circumcised and a part of Christ. The Kingdom of God is not just for Israel, God’s people, the Jews, you know! But he who believes in Yeshua HaMashiach, YHWH, Jesus Christ, and has been baptized, is buried and raised and a new creation. This counts for everyone, both for the Jew and for the Greek! The violations have been canceled for everyone!

Verily, Prophet Benjamin and Theresa are the two anointed ones of God,
and appointed by the God of Abraham, Isaac, and Jacob in the end times, in order to warn you by the Holy Spirit of God, and to bring on the messages. The warriors as well have been appointed as God’s instruments to share the messages. You too can mean a lot to the Lord as a born again Christian.

This English Bible translation of Baruch 6 is reliable and good: https://www.biblegateway.com/passage/?search=baruch+6&version=RSVCE