Verily, the total world order has the world already well under control, in collaboration with NASA and UTA, the global data traffic. (After clicking the video, wait for a moment until it plays.) 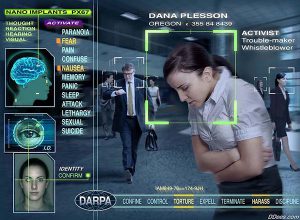 Hello, welcome! This is a revealing message from God, delivered by the messenger angel of God to end-time Prophet Benjamin Cousijnsen on April 25th, 2018.

The technological demons are working hard to increase the pressure on the Earth, as it was predicted in 2012.
The battle for the preservation of souls has never been so intense! Also, the takeover by satan on the Earth is becoming more and more visible. Christians must be physically and spiritually strong right now and choose for the full 100% for Yeshua HaMashiach, YHWH, Jesus Christ, the Nazarene, the Son of God!

Verily, the total world order has the world already well under control, in collaboration with NASA and UTA, the global data traffic.
And they strive to influence man through advertising media and hospitals and other institutions, that one can safely have electrodes implanted into the brain, and can sign up for the RFID chip. Many banks even now want to get rid of the bank card system, because they have subjected themselves to the total control of the Illuminati!

In some parts of the world one has already been chipped and provided with the number of the beast!
At first the intention was that everyone would be provided with an RFID chip in 2013, but through the prayers, among other things, it was at a standstill for a while. Verily, my name is Michaël, a messenger angel of God.

Verily, by means of satellites one can already control man through the brain, via a kind of radio frequency waves.
Tests had already been done near Mexico with the animals in the sea. And many animals died. That’s how easy they have everything under control! He who is dark becomes darker, and he who is pure, and steadfast in Yeshua HaMashiach, YHWH, Jesus Christ, and he who keeps His law is a hero, a warrior of God, and more than a conqueror!

And Ephesians 6, verses 10 to 19  Finally, be strong in the Lord, and in the strength of his might. Put on the whole armor of God, that you may be able to stand against the wiles of the devil. For our wrestling is not against flesh and blood, but against the principalities, against the powers, against the world’s rulers of the darkness of this age, and against the spiritual forces of wickedness in the heavenly places. Therefore, put on the whole armor of God, that you may be able to withstand in the evil day, and, having done all, to stand. Stand therefore, having the utility belt of truth buckled around your waist, and having put on the breastplate of righteousness, and having fitted your feet with the preparation of the Gospel of peace; above all, taking up the shield of faith, with which you will be able to quench all the fiery darts of the evil one. And take the helmet of salvation, and the sword of the Spirit, which is the spoken word of God; with all prayer and requests, praying at all times in the Spirit, and being watchful to this end in all perseverance and requests for all the saints: on my behalf, that utterance may be given to me in opening my mouth, to make known with boldness the mystery of the Gospel.

And Revelation 22, verses 6 and 7  He said to me, “These words are faithful and true. The Lord God of the spirits of the Prophets sent his angel to show to his bondservants the things which must happen soon.” “Behold, I come quickly. Blessed is he who keeps the words of the prophecy of this book.”

Verily, arm yourself against the works of satan, which are in full swing!
Trust in the Lord, your Helper!
I’m going now, spoke the messenger angel of God, Ruacha, Yeshu, Shalom!