Revelation of God, including the function of the eyes in the wings of the Seraphim! At this time the Lord God, YHWH, brings many mysteries to light! You will also hear even more revelations about God’s warriors, the Seraphim, in this revelation of God, and you will hear more about the one who has the leadership over all the angels of heaven, at the service of and to the honor of the King of kings, Yeshua HaMashiach, YHWH, Jesus Christ! 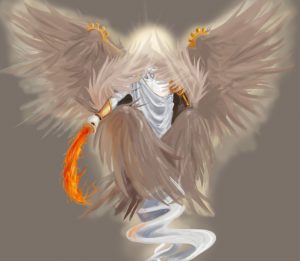 Hello, warmly welcome! On September 9th, 2016, the messenger angel of God brought on, word for word, the following message to end-time Prophet of the last days, Benjamin Cousijnsen.

Verily, I reveal to you the following:
God has a powerful Seraphim, who was there already from the beginning.

Verily!
From the beginning, God created both the heavens and the earth, and also many angels who are at the service of the God of all flesh. They are also called stars, and have supernatural talents. The leader of the Seraphim has six wings. The wings have many eyes, which give a wider field of view than that of a human being. Also, this Seraphim is able, among other things, to switch to one of the eyes. The wings are a lot like a peacock. He can observe everything around him that way. The Seraphim carry the knowledge of God, and have four faces. They stand closest to God’s throne.

Ezekiel 10, verse 4 and 5  The glory of the LORD mounted up from the cherub, and stood over the threshold of the house; and the house was filled with the cloud, and the court was full of the brightness of the glory of the LORD. The sound of the wings of the cherubim was heard even to the outer court, as the voice of God Almighty when he speaks.

Ezekiel 10, verse 21  Every one had four faces, and every one four wings; and the likeness of the hands of a man was under their wings.

Verily, thus there are warriors who master all martial arts, both of the earth and martial arts throughout all the centuries.
Verily, my name is Serafía and I am a messenger angel of God. Just as Yeshua HaMashiach, YHWH, Jesus Christ, was born, and went from great to small, and was born as a human being, thus there are also some messenger angels and Seraphim who have been brought to the earth, in order to carry out God’s plans as a human being, and also to experience what it is like to be human!

John 20, verse 24 to 31  But Thomas, one of the twelve, called Didymus, wasn’t with them when Jesus came. The other disciples therefore said to him, “We have seen the Lord!” But he said to them, “Unless I see in his hands the print of the nails, and put my hand into his side, I will not believe.” After eight days again his disciples were inside, and Thomas was with them. Jesus came, the doors being locked, and stood in the midst, and said, “Peace be to you.” Then he said to Thomas, “Reach here your finger, and see my hands. Reach here your hand, and put it into my side. Don’t be unbelieving, but believing.” Thomas answered him, “My Lord and my God!” Jesus said to him, “Because you have seen me, you have believed. Blessed are those who have not seen, and have believed.” Therefore Jesus did many other signs in the presence of his disciples, which are not written in this book; but these are written, that you may believe that Jesus is the Christ, the Son of God, and that believing you may have life in his name.

And Revelation 22, verse 6  He said to me, “These words are faithful and true. The Lord God of the spirits of the Prophets sent his angel to show to his bondservants the things which must happen soon”.
Verse 16  “I, Jesus, have sent my angel to testify these things to you for the assemblies. I am the root and the offspring of David; the Bright and Morning Star.”

Verily, thus the Almighty testifies that the Bible is not complete, because for many it goes beyond their understanding!
Be open to God’s words, in order to discover more of the mysteries!

Proverbs 5, verse 7  Now therefore, my sons, “but this also counts for the daughters“, listen to me. Don’t depart from the words of my mouth.

And Psalm 9, verse 3  When my enemies turn back, they stumble and perish in your presence.