This is a revealing and informative message of God, which is fully reliable, 100%, as are all the messages of God, that Prophet Benjamin Cousijnsen receives, writes down and passes on almost daily. All that he passes on comes to fulfillment. The messages are delivered by God’s messenger angels, and spread worldwide and spoken in several languages in these end times. Everything is being done in order and according to the will of the Lord God, YHWH, Jesus Christ, Yeshua HaMashiach, alone! You will hear today why, despite the promises made by Obama to Hillary Clinton, he temporarily chose now for Donald Trump after all! 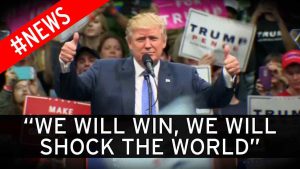 Hello, welcome! On November 10th, 2016, the messenger angel of God brought on, word for word, this revealing and prophetic message of God to end-time Prophet of the last days, Benjamin Cousijnsen.

Shalom! I greet you in the wonderful name of Yeshua HaMashiach, YHWH, Jesus Christ. Verily, my name is Revelado and I am a messenger angel of God.

Verily, don’t be fooled by the election results, because those mean nothing.
Despite the fact that Hillary had signed a contract, to renounce her own soul, Obama, after all his promises to Hillary, has chosen for Donald Trump after all! Verily, in the beginning Obama has said: “I’d rather jump over into you, Hillary, than into Donald Trump”. But a snake is cunning!

After a few intense performances by Hillary and Donald Trump, the antichrist changed his mind, and thought to himself:
‘Hillary has already given her soul. Why wouldn’t I take Donald Trump too? I will take him on via his appearance, and totally take him over!’

Verily, thus in all kinds of ways, including also via the technology of the fallen angels, satan wants to take over man.
Verily, Donald Trump will put the world upside down! And Donald Trump will die. Verily, stay and be close to Yeshua HaMashiach, YHWH, Jesus Christ, and support the Evangelical EndTimeMachine!
I’m going now, spoke the messenger angel of God, Ruacha, Yeshu, Shalom!