As a scientist, he makes calculations, and is a good investigator who makes use of this. Via the media and the internet, he figures out where an event could occur! Read or listen to the complete message of God. 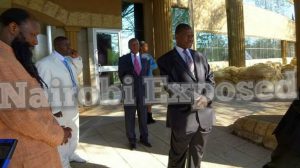 Shalom, welcome! On October 11th, 2016, the messenger angel of God brought on the following message of God to end-time Prophet Benjamin Cousijnsen.

2 Thessalonians 2, verse 3  Let no one deceive you in any way. For it will not be, unless the departure comes first, and the man of sin is revealed, the son of destruction.

Verily, there are so many false churches and prophets.
However, there is only one true Prophet, anointed from the beginning with holy oil in Heaven, and placed back on the Earth in his body, after having been paralyzed and in a coma for 16 years! More on this can be found on the website.

Verily!
The scientist, the false prophet David Owuor, has said each year, from 2012 to 2016, in many statements and videos, that I, the Lord, your Rabbouni, would come. He is not a Prophet, and again he’s wrong!

2 Timothy 4, verses 3 and 4  For the time will come when they will not listen to the sound doctrine, but, having itching ears, will heap up for themselves teachers after their own lusts; and will turn away their ears from the truth, and turn aside to fables.
And verses 1 and 2  I command you therefore before God and the Lord Jesus Christ, who will judge the living and the dead at his appearing and his Kingdom: preach the word; be urgent in season and out of season; reprove, rebuke, and exhort, with all patience and teaching.

David Owuor is a teacher and scientist who uses the occult, which is drenched with a Christian sauce!
He, as a scientist and specialist, makes calculations, and is a good researcher who makes use of this. Via the media and the internet, he figures out where an event could occur. As a scientist, Owuor is a specialist in manipulating and copying! Verily, my name is Revelado and I am a messenger angel of God. Satan imitates God and distorts everything! Satan brings a different gospel.

Galatians 1, verse 6  I marvel that you are so quickly deserting him who called you in the grace of Christ to a different “gospel”.

1 Timothy 4, verses 1 to 3  But the Spirit says expressly that in later times some will fall away from the faith, paying attention to seducing spirits and doctrines of demons, through the hypocrisy of men who speak lies, branded in their own conscience as with a hot iron; forbidding marriage and commanding to abstain from foods which God created to be received with thanksgiving by those who believe and know the truth.

Verily, he is trying to replace his forgeries, and there is no place for the truth!
Also, David Owuor has his own office, and as a so-called prophet, he gets paid if one wants to visit him. One gets a personal prophecy, and the hours that one is present are calculated. As one makes an appointment with the doctor, thus one makes an appointment with this false prophet. More about him can be found at the Evangelicalendtimemachine.com. Also, if you listen to his messages, you will discover that many prophecies have already been foretold by God’s only true Prophet Benjamin Cousijnsen, before the false prophet opened his mouth, and began to scream!

Verily, a true Prophet not only brings bad news, but also encouragements and the supernatural, and so on.
And out of the Throne of God, the angels take off, in order to convey a message to Prophet Benjamin Cousijnsen.

Revelation 22, verse 6  He said to me, “These words are faithful and true. The Lord God of the spirits of the Prophets sent his angel to show to his bondservants the things which must happen soon”.
And verses 16 and 17  “I, Jesus, have sent my angel to testify these things to you for the assemblies. I am the root and the offspring of David; the Bright and Morning Star.” The Spirit and the bride say, “Come!” He who hears, let him say, “Come!” He who is thirsty, let him come. He who desires, let him take the water of life freely.

John 3, verse 16  For God so loved the world, that he gave his one and only Son, that whoever believes in him should not perish, but have eternal life.