The fallen angels cause the step-wise total takeover of mankind by means of technology. Just think of games like Pokémon GO! You will hear a summary of the bitter fruits in everyday life. The total takeover is still in full swing! 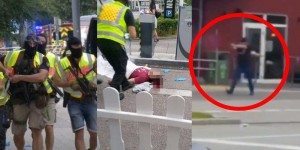 Hello, very welcome! On July 23rd, 2016, the messenger angel of God brought on the following message to end-time Prophet of the last days, Benjamin Cousijnsen.

Shalom! I greet you in the almighty name of Yeshua HaMashiach, YHWH, Jesus Christ. Verily, my name is Peada and I am a messenger angel of God.

You have already been warned of the fallen angels who are using the technology, in order to take over mankind!
The Islamic State movement and the attacks were already foretold by Prophet Benjamin Cousijnsen. More information can be found in the message from September 7, 2015, entitled: ‘Violence will increase with the arrival of the refugees!’ Also, an Iranian-German man from Munich shot more than 10 people dead in a shopping mall. Yet another drove his car into neighbors, after an argument in Amsterdam. And a man with a baby had jumped out of a window because of a family drama as well!

Also, many are só taken over by Pokémon GO that they cause accidents and nuisance.
Even a driver was so into the game that he drove himself to his death into a lamppost. And the last thing that he heard, through the game, was: “Poke-demon-go!”

Verily, Earth!
By disobedience, the God of Abraham, Isaac and Jacob will not be able to be a blessing to you who rejects Yeshua HaMashiach, Jesus Christ, YHWH! The visitors from space find themselves on the earth, and the total takeover is in full swing! Also listen to the message, entitled: ‘The end time has come on earth!’ And many souls do not even know anymore what they are doing.

And how far are you already on your way to perish?
Also China, among others, had been warned, and see what came! Verily, he who doesn’t repent, will be taken over.

John 3, verse 16 to 21  For God so loved the world that he gave his one and only Son, that whoever believes in him shall not perish but have eternal life. For God did not send his Son into the world to condemn the world, but to save the world through him. Whoever believes in him is not condemned, but whoever does not believe stands condemned already because they have not believed in the name of God’s one and only Son. This is the verdict: Light has come into the world, but people loved darkness instead of light because their deeds were evil. Everyone who does evil hates the light, and will not come into the light for fear that their deeds will be exposed. But whoever lives by the truth comes into the light, so that it may be seen plainly that what they have done has been done in the sight of God.