A message from God for the celebration of the Lord’s Supper, in which Biblical conditions are given by the Lord, Yeshua HaMashiach, YHWH, Jesus Christ, for celebrating the Lord’s Supper. (After clicking the video, wait for a moment until it plays.) 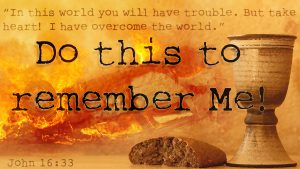 Hello, welcome! On December 4th, 2017, the messenger angel of God brought on the following message to Prophet Benjamin Cousijnsen.

Shalom! I greet you in the almighty Name of Yeshua HaMashiach, YHWH, Jesus Christ. Verily, Kadosh, Holy is the Lord of lords, the King of kings!

Verily, appear full of respect and humility, and without sin, before God’s eyes.
Because God is Holy! Verily, my name is Blender, a messenger angel of God.

1 Corinthians 11, verse 17  But in giving you this command, I don’t praise you, that you come together not for the better but for the worse.
And verses 20 to 22  When therefore you assemble yourselves together, it is not the Lord’s supper that you eat. For in your eating each one takes his own supper first. One is hungry, and another is drunken. What, don’t you have houses to eat and to drink in? Or do you despise God’s assembly, and put them to shame who don’t have? What shall I tell you? Shall I praise you? In this I don’t praise you.

Verily, some abuse the Holy Supper.
And all they care about is eating and drinking!

1 Corinthians 11, verse 23  For I received from the Lord that which also I delivered to you, that the Lord Jesus on the night in which he was betrayed took bread.
Verse 24  When he had given thanks, he broke it, and said, “Take, eat. This is my body, which is broken for you. Do this in memory of me”.

Verily, don’t partake in the Lord’s Supper as a heathen, but as a believer!
And take part in it in remembrance of Yeshua HaMashiach, YHWH, Jesus Christ. And remember what He has done for you on the cross of Golgotha, and thank Him for His great sacrifice on the cross!

1 Corinthians 11, verses 24 to 29  When he had given thanks, he broke it, and said, “Take, eat. This is my body, which is broken for you. Do this in memory of me”. In the same way he also took the cup, after supper, saying, “This cup is the new covenant in my blood. Do this, as often as you drink, in memory of me.” For as often as you eat this bread and drink this cup, you proclaim the Lord’s death until he comes. Therefore whoever eats this bread or drinks the Lord’s cup in a manner unworthy of the Lord will be guilty of the body and the blood of the Lord. But let a man examine himself, and so let him eat of the bread, and drink of the cup. For he who eats and drinks in an unworthy manner eats and drinks judgment to himself, if he “or she” doesn’t discern the Lord’s body.

Verily, when participating, it is good to say a prayer, and to ask for forgiveness and cleansing of your sins.
Because if you participate as a sinner, you are abusing the body of Christ and the Holy Supper! So take part as Yeshua HaMashiach, YHWH, Jesus Christ, intended it. It’s also with good reason called ‘Holy Supper’, because God is Kadosh, Holy!

Verily, think about Yeshua HaMashiach, YHWH, Jesus Christ, and thank Him, full of respect and humility, before you take part in the Holy Supper.
Do this from your heart and mind, and be holy before Him, and eat and drink to His honor and glory! Unfortunately, some still have to repent before they participate.
I’m going now, spoke the messenger angel of God, Ruacha, Yeshu, Shalom!