Many grieve God, and mock the Ten Commandments and the Holy Words which He spoke in the Holy Scriptures. (After clicking the video, wait for a moment until it plays.) 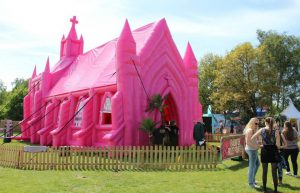 Hello, welcome! On September 20th, 2017, a messenger angel of God brought on the following message to end-time Prophet Benjamin Cousijnsen.

Shalom! I greet you in the almighty Name of Yeshua HaMashiach, YHWH, Jesus Christ. Verily, children of the Most High, my name is Chreas and I am a messenger angel of God.

Once there was a church that magnified the Lord with praise and worship, and the church was packed.
And before the doors opened, the group who led in praise and worship on Sunday’s, together with many others, quickly snuffed out the last lit cigarette in the ashtray that stood in front of the church. Look, there Chris was, hand in hand with Rick! Rick looked well made-up again, and as a man he was wearing eyeshadow and lipstick, and had a pink handbag. “Hey, nice that you’re here!” a churchgoer yelled to Lea and Chin, who couldn’t keep their hands off each other. The largest crowd walked into the church, and a brother and sister kept standing by the door, who welcomed everyone and hugged and kissed them full on the mouth, as if they hadn’t seen each other for years! And after this, a place was pointed out in the church. A little later, you could hear the car arrive, a BMW, which the pastor got out of, and he sneaked in. Meanwhile, the announcements were made, and one was also invited to go to the corner of the church after the church service, where the cafe bar was open, in order to come and have a nice beer and to catch up on the great church service.

The new members who had joined were announced.
And even the gay parade was announced! And announcements were made about when one could be baptized as a child of God.

Genesis 6, verses 1 to 6  It happened, when men began to multiply on the surface of the ground, and daughters were born to them, that God’s sons saw that men’s daughters were beautiful, and they took for themselves wives of all that they chose. The LORD said, “My Spirit will not strive with man forever, because he also is flesh; yet will his days be one hundred twenty years.” The Nephilim were in the earth in those days, and also after that, when God’s sons came in to men’s daughters. They bore children to them. Those were the mighty men who were of old, men of renown. The LORD saw that the wickedness of man was great in the earth, and that every imagination of the thoughts of his heart was only evil continually. The LORD was sorry that he had made man on the earth, and it grieved him in his heart.

Verily, in Enoch is much described about the sons of God, the fallen angels.
Today, the wickedness has increased more and is worse than Sodom and Gomorrah! It is understandable that it grieved the Lord that He had made man. Many grieve God and mock the Ten Commandments and the Holy words, which He had spoken in the Holy Scriptures.

Revelation 22, verse 6  He said to me, “These words are faithful and true. The Lord God of the spirits of the Prophets sent his angel to show to his bondservants the things which must happen soon”.
And verses 10 to 12  He said to me, “Don’t seal up the words of the prophecy of this book, for the time is at hand. He who acts unjustly, let him act unjustly still. He who is filthy, let him be filthy still. He who is righteous, let him do righteousness still. He who is holy, let him be holy still. Behold, I come quickly. My reward is with me, to repay to each man according to his work”.
And verses 18 and 19  I testify to everyone who hears the words of the prophecy of this book, if anyone adds to them, may God add to him the plagues which are written in this book. If anyone takes away from the words of the book of this prophecy, may God take away his part from the tree of life, and out of the holy city, which are written in this book.

And Romans 1, verse 18  For the wrath of God is revealed from heaven against all ungodliness and unrighteousness of men, who suppress the truth in unrighteousness.
And verses 24 to 32  Therefore God also gave them up in the lusts of their hearts to uncleanness, that their bodies should be dishonored among themselves, who exchanged the truth of God for a lie, and worshiped and served the creature rather than the Creator, who is blessed forever. Amen. For this reason, God gave them up to vile passions. For their women changed the natural function into that which is against nature. Likewise also the men, leaving the natural function of the woman, burned in their lust toward one another, men doing what is inappropriate with men, and receiving in themselves the due penalty of their error. Even as they refused to have God in their knowledge, God gave them up to a reprobate mind, to do those things which are not fitting; being filled with all unrighteousness, fornication, wickedness, covetousness, maliciousness; full of envy, murder, strife, deceit, evil habits, secret slanderers, backbiters, hateful to God, insolent, haughty, boastful, inventors of evil things, disobedient to parents, without understanding, covenant breakers, without natural affection, unforgiving, unmerciful; who, knowing the ordinance of God, that those who practice such things are worthy of death, not only do the same, but also approve of those who practice them.
And Romans 2, verse 12  For as many as have sinned without law will also perish without the law. As many as have sinned under the law will be judged by the law.

Romans 13, verses 1 and 2  Let every soul be in subjection to the higher authorities, for there is no authority except from God, and those who exist are ordained by God. Therefore he who resists the authority, withstands the ordinance of God; and those who withstand will receive to themselves judgment.

Verily, so be a church as God intended it!
I’m going now, spoke the messenger angel of God, Ruacha, Yeshu, Shalom!