AUG 28, 2012  THE LORD GOD SPEAKS TO PROPHET BENJAMIN COUSIJNSEN. KOREA IS NOW HIT BY GOD’S POWER, TYPHOON BOLAVEN! THE MESSENGER ANGEL OF GOD HAD, ON BEHALF OF THE LORD, ALREADY LONG BEEN WARNING! 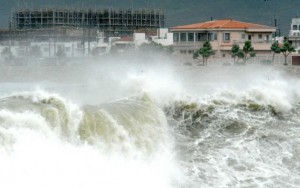 Hello! On Tuesday, August 28th, 2012, the messenger angel of God brought on this message to Benjamin Cousijnsen. Listen carefully!

Shalom Benjamin Cousijnsen, I greet you in the name of Yeshua HaMashiach, Jesus Christ.

Benjamin, the messenger angel of God, Thunder, has reached Korea…
Now, he will have his power of God come true! Why do they not listen? You name it Typhoon Bolaven. The messenger angel of God had, on behalf of the Lord, already long been warning. He who does not want to hear, will perish.
Also the Lord has warned your country, who listens!
Repent, and do not be like Sodom. You there, repent! What should God do yet, to let you bow!

You there, workers of Jesus Christ, let not yourselves blow along with the wind of the church, but by the Holy Spirit of God!
To whom should you listen?
Choose you this day whom you will serve!

James 3, verse 8 to 10  But nobody can tame the tongue. It is a restless evil, full of deadly poison. With it we bless our God and Father, and with it we curse men, who are made in the image of God.

Benjamin says already: “Father, just call me Benjamin”.
I say: Benjamin, you have been chosen and He calls you: you’re His beloved, chosen Prophet. And he who is against you, is against Me, because they would not hear. Not then, not now!
Benjamin Cousijnsen, what God says is of value; you are His Prophet.
I’m going now, my name was Ruachiama, Shalom!