More revelations about Assad and a reference to another revealing message of God about this killer, whose reward is already known. 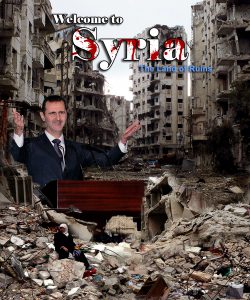 Hello, welcome! On February 15th, 2017, this revealing message of God was brought on, word for word, to Prophet Benjamin Cousijnsen.

Shalom! I greet you in the wonderful name of Yeshua HaMashiach, YHWH, Jesus Christ. Verily, my name is Breseach and I am a messenger angel of God.

Verily!
How many messages of God have revealed to you that Assad is guilty of massacres, in which Christian villages were wiped out with the nerve gas Sarin? I reveal to you that the Christian organizations and Christians have a hell in Syria!

Assad makes use of a hidden prison, which is similar to a FEMA camp.
Christians are made the playthings of sadistic acts and rapes, and used for the removal of body parts and for tests!

Verily, Assad poses as an innocent.
Also listen to the message entitled: ‘Assad has gruesome murders to his name!’ from September 3, 2013*. In secret, he has also sold poison gas to Iran because Iran wants to destroy Israel! Verily, Assad is a killer, and his reward is already known.

Ezekiel 7, verses 10 and 11  Behold, the day, behold, it comes: your doom is gone forth; the rod has blossomed, pride has budded. Violence is risen up into a rod of wickedness; none of them shall remain, nor of their multitude, nor of their wealth: neither shall there be eminency among them.

And John 3, verses 16 to 21  For God so loved the world, that he gave his one and only Son, that whoever believes in him should not perish, but have eternal life. For God didn’t send his Son into the world to judge the world, but that the world should be saved through him. He who believes in him is not judged. He who doesn’t believe has been judged already, because he has not believed in the name of the one and only Son of God. This is the judgment, that the light has come into the world, and men loved the darkness rather than the light; for their works were evil. For everyone who does evil hates the light, and doesn’t come to the light, lest his works would be exposed. But he who does the truth comes to the light, that his works may be revealed, that they have been done in God.
I’m going now, spoke the messenger angel of God, Ruacha, Yeshu, Shalom!

* Verily, on September 3, 2013, it was revealed to you that Syria has made itself guilty of the nerve gas Sarin, and that Assad committed this deed!
– See more at: https://www.evangelicalendtimemachine.com/assad-has-gruesome-murders-to-his-name/