APR 2, 2013  PROPHECY: HEAR ATHENS, WHAT WILL COME OVER YOU! HEAR THE VOICE OF ONE, CRYING IN ATHENS: REPENT! TRULY, THE KINGDOM OF HEAVENS IS AT HAND! 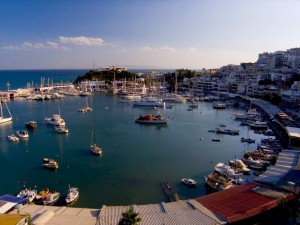 Hello, welcome! On April 2nd, 2013, the messenger angel of God brought on the following message to Benjamin Cousijnsen.

Shalom! I greet you in the almighty name of Yeshua HaMashiach, Jesus Christ. The messenger angel of God said,

Verily, verily, I tell you, Prophet Benjamin Cousijnsen, follow me.
Benjamin asked, “Follow me? Where are we going?”
The messenger angel of God spoke, My name is Semaja, and I am sent to you with a message. Step out of your body now and fear not; your body remains behind.
Benjamin said, “Strange, everything will be written down, while I myself are following you in the spirit”.
We’ll walk to the closet…

Pull the closet doors open and describe what you’re seeing, spoke the messenger angel of God.
Benjamin said, “I see a kind of mountain in the distance, with an almost square wall with pillars, that extend in a square. It looks Roman. Furthermore, I see many white square houses with red roofs.”
The angel of God spoke, Come Benjamin, jump!
I jumped first, the angel of God followed me. It looked like a jump out of a plane, because immediately we found ourselves in the sky.
“Wow!” cried Benjamin, “all those houses in a row, but where am I now actually?”
The angel of God said, You are in Piraeus in Athens.
Benjamin said, laughing, “Wow, I think I’m faster here than one or another fighter jet!”

The messenger angel of God spoke, O woe, Athens, hear the voice of one crying in Athens: Repent! Truly, the Kingdom of heavens is at hand!

Jeremiah 25, verse 32 and 33, and Job 37, verse 9, and Isaiah 40, verse 24  Read this aloud.
Jeremiah 25, verse 32 and 33  Here it is written: Thus says the LORD of hosts, Behold, evil shall go forth from nation to nation, and a great tempest shall be raised up from the uttermost parts of the earth. The slain of the LORD shall be at that day from one end of the earth even to the other end of the earth: they shall not be lamented, neither gathered, nor buried; they shall be dung on the surface of the ground.
Job 37, verse 9  Here it is written: Out of its chamber comes the storm, And cold out of the north.
Isaiah 40, verse 24  Here it is written: Yes, they have not been planted; yes, they have not been sown; yes, their stock has not taken root in the earth: moreover he blows on them, and they wither, and the whirlwind takes them away as stubble.
The messenger angel of God spoke further,

He who has the Son of God, does love life, but you’re not listening.

Ephesians 4, verse 18 to 23, and Ephesians 5, verse 28  Read this aloud.
Ephesians 4, verse 18 to 23  Here it is written: Being darkened in their understanding, alienated from the life of God, because of the ignorance that is in them, because of the hardening of their hearts; who having become callous gave themselves up to lust, to work all uncleanness with greediness. But you did not learn Christ that way; if indeed you heard him, and were taught in him, even as truth is in Jesus: that you put away, as concerning your former way of life, the old man, that grows corrupt after the lusts of deceit; and that you be renewed in the spirit of your mind.
Ephesians 5, verse 28  Here it is written: Even so ought husbands also to love their own wives as their own bodies. He who loves his own wife loves himself.
The messenger angel of God spoke further,

O woe, he who does not want to hear, will perish!
O woe! Listen! Bend your knees and fold your hands and hear.

Read aloud: John 3, verse 18 to 19  Here it is written: He who believes in him is not judged. He who doesn’t believe has been judged already, because he has not believed in the name of the one and only Son of God. This is the judgment, that the light has come into the world, and men loved the darkness rather than the light; for their works were evil.