Revealing and informative message of God: The father of lies, antichrist Barack Obama, is also covering up the truth! Read or listen further to the entire message. 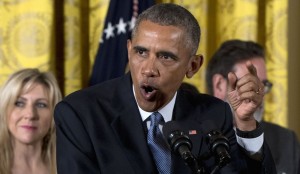 Hello, welcome! On January 26th, 2016, the messenger angel of God delivered the following revealing message to end-time Prophet Benjamin Cousijnsen, commissioned by the almighty God, YHWH, the God of Abraham, Isaac and Jacob.

Shalom! I greet you in the almighty name of Yeshua HaMashiach, Jesus Christ. Verily, my name is Revelado and I am a messenger angel of God.

Verily, Barack Obama, the antichrist, already knows that he will be thrown into the lake of fire.

Revelation 19, verse 20 and 21  The beast was taken, and with him the false prophet who worked the signs in his sight, with which he deceived those who had received the mark of the beast and those who worshiped his image. These two were thrown alive into the lake of fire that burns with sulfur. The rest were killed with the sword of him who sat on the horse, the sword which came out of his mouth. All the birds were filled with their flesh.
The messenger angel of God spoke further,

Verily!
As the antichrist gives an optimistic show campaign, that one doesn’t need to be afraid of the Islamic terror threat, he also knows very well that the prophecies will be fulfilled, and that the world is being taken over, worldwide, by Muslim terrorists, which is in full swing! The antichrist makes it known that America is not afraid, but the strongest of the world, and that ISIS is not a threat. Although the messages of Prophet Benjamin Cousijnsen, and the events in the world, show a quite different side, such as fights and rapes, attacks, and so on.

In the website you will also find a lot of information about ISIS and immigrants.
If you type in migrants or ISIS in the Search bar, you will come across a lot. It so happens that the government covers up the truth, as well as the antichrist, who doesn’t want the truth to flare up! Verily,

This is the place for the antichrist!

Revelation 21, verse 8  But for the cowardly, unbelieving, sinners, abominable, murderers, fornicators, sorcerers, idolaters, and all liars, their part is in the lake that burns with fire and sulfur, which is the second death.

Your only salvation is only to be found in Yeshua HaMashiach, Jesus Christ!