August 7, 2017  Due to an accident, Benjamin Cousijnsen was given a guided tour in Heaven and stayed there for 16 years. He was chosen to return to the Earth, in order to finish God’s work. (After clicking the video, wait for a moment until it plays.) 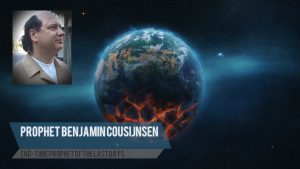 Hello, very welcome! The following message of God was delivered to Prophet Benjamin Cousijnsen by a messenger of God.

Shalom! I greet you in the almighty name of Yeshua HaMashiach, YHWH, Jesus Christ. Verily, my name is Riomero and I am a messenger angel of God.

Read with me: Revelation 22, verse 6  He said to me, “These words are faithful and true. The Lord God of the spirits of the Prophets sent his angel to show to his bondservants the things which must happen soon”.

Verily, both in the Old and in the New Testament, there were Prophets.

Numbers 11, verses 24 and 25  Moses went out, and told the people the words of the LORD: and he gathered seventy men of the elders of the people, and set them around the Tent. The LORD came down in the cloud, and spoke to him, and took of the Spirit that was on him, and put it on the seventy elders: and it happened that when the Spirit rested on them, they prophesied, but they did so no more.

Wow! Seventy men, and they prophesied, but this never happened again.
God knew His people and who could handle it!

Numbers 11, verses 26 to 30  But there remained two men in the camp, the name of the one was Eldad, and the name of the other Medad: and the Spirit rested on them; and they were of those who were written, but had not gone out to the Tent; and they prophesied in the camp. There ran a young man, and told Moses, and said, Eldad and Medad do prophesy in the camp. Joshua the son of Nun, the minister of Moses, one of his chosen men, answered, My lord Moses, forbid them. Moses said to him, Are you jealous for my sake? I wish that all the LORD’s people were Prophets, that the LORD would put his Spirit on them! Moses got him into the camp, he and the elders of Israel.

Verily, not everyone can call himself a Prophet.
So Eldad and Medad had not joined those seventy men or gone into the tent. They had stayed behind in the camp while those seventy were meeting and praying. Again, I say to you, God knows the hearts! And do you also really think that the Holy Spirit was not there from the very beginning?

And Numbers 11, verse 29  Moses said to him, Are you jealous for my sake? I wish that all the LORD’s people were Prophets, that the LORD would put his Spirit on them!

And Deuteronomy 18, verse 13  You shall be perfect with the LORD your God.
And verses 15 to 20  The LORD your God will raise up to you a Prophet from the midst of you, of your brothers, like me. You shall listen to him. This is according to all that you desired of the LORD your God in Horeb in the day of the assembly, saying, Let me not hear again the voice of the LORD my God, neither let me see this great fire any more, that I not die. The LORD said to me, They have well said that which they have spoken. I will raise them up a Prophet from among their brothers, like you; and I will put my words in his mouth, and he shall speak to them all that I shall command him. It shall happen, that whoever will not listen to my words which he shall speak in my name, I will require it of him. But the Prophet, who shall speak a word presumptuously in my name, which I have not commanded him to speak, or who shall speak in the name of other gods, that same Prophet shall die.

Verily, always listen to God’s appointed true Prophet.
He has been sanctified, and he saw the two worlds ever since he was a child. Due to an accident, he was given a guided tour in Heaven and stayed there for 16 years, and was chosen to return to the Earth, in order to finish God’s work, as did the Prophets of old. The Biblical Prophets as well were feared on the Earth. And one did everything to destroy God’s work, and the enemy even sent female spies who had to pull out all the stops, in order to seduce and destroy the Prophets of God in the old days! Verily, one also sought to take away their gifts. Also think of the story of Samson.

Proverbs 28, verse 5  Evil men don’t understand justice; but those who seek the LORD understand it fully.

And Isaiah 48, verse 17  Thus says the LORD, your Redeemer, the Holy One of Israel: I am the LORD your God, who teaches you to profit, who leads you by the way that you should go.
And Isaiah 54, verses 15 to 17  Behold, they may gather together, but not by me: whoever shall gather together against you shall fall because of you. Behold, I have created the smith who blows the fire of coals, and brings forth a weapon for his work; and I have created the waster to destroy. No weapon that is formed against you shall prosper; and you will condemn every tongue that rises against you in judgment. This is the heritage of the servants of the LORD, and their righteousness which is of me, says the LORD.

Verily, for no weapon shall penetrate, so that all things might be fulfilled!
Amen!
I’m going now, spoke the messenger angel of God, Ruacha, Yeshu, Shalom!