In this message of God, you will hear or read about a Dutch woman, for example, who had converted to Islam, until she began to understand the language and studied the Quran. Then she found out that all those rules had ensured that she was treated like this! 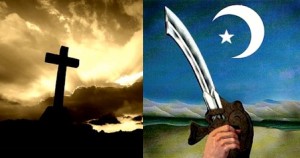 Hello, very welcome! On March 17th, 2015, an angel of the Lord brought the following message, on behalf of the God of love, the only true God, the God of Abraham, Isaac and Jacob, to Benjamin Cousijnsen, end-time Prophet of the last days.

Shalom! I greet you in the wonderful name of Yeshua HaMashiach, Jesus Christ. Verily, my name is Kerbin and I am a messenger angel of God.

Verily, a Dutch woman had converted to Islam years ago.
And still others run away from home, to offer themselves as a bride for Islam! Verily, and many chose for Islam, in order to survive like that, because of the attacks!

Read aloud: John 15, verse 17  I command these things to you, that you may love one another.

Verily, love Islam?
What do we get now? The men are instructed that they may beat their wives, and it goes very far!

A Turkish woman, once a Dutchwoman, married and converted to Islam,
and managed the language so well over time that she started to read the Quran. Verily, what a shock! Now it became clear to her, what she had found there. And all the puzzle pieces fell into place for her. All treachery and deceit and suspicion that she had encountered in her Islamic environment, were in the Quran. She found out that all those rules ensured that she was beaten and threatened and spat upon. She became completely isolated! Verily, still she managed to get hold of a Bible and after a long time, she began to read in it…

Read aloud: Leviticus 19, verses 17 and 18  You shall not hate your brother in your heart. You shall surely rebuke your neighbor, and not bear sin because of him. You shall not take vengeance, nor bear any grudge against the children of your people; but you shall love your neighbor as yourself. I am the LORD.

Verily, this is a teaching about love, which is totally different from the Quran and this nation!
Verily, it is also said in the Quran that an apostate must be killed. Verily, but how different the following words sound in:

Leviticus 19, verse 34  The stranger who lives as a foreigner with you shall be to you as the native-born among you, and you shall love him as yourself; for you lived as foreigners in the land of Egypt. I am the LORD your God.

Verily, she has found the truth:
Yeshua HaMashiach, Jesus Christ, with the sword of Islam above her head! She has fled to the Netherlands, but does love her neighbor, such as Yeshua HaMashiach, Jesus Christ, too loves His neighbor and prays for His people! She often says, “Father, forgive them, for they know not what they do! Open their eyes, as you have done to me”.