There are many angels with tasks in heaven. The messenger angel of God gave an example of a task on the basis of a Biblical event. Read or listen to the full message of God. 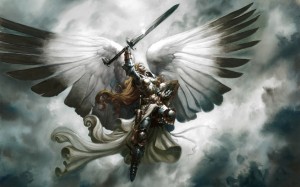 Hello, welcome! On May 2nd, 2016, God’s messenger angel brought on the following message to end-time Prophet of the last days, Benjamin Cousijnsen.

Shalom! I greet you in the wonderful name of Yeshua HaMashiach, YHWH, Jesus Christ. Verily, kadosh, holy is your Rabbouni!

Sirach 13, verse 15  Every creature prefers its own kind, and people are no different.

Verily, my name is Chamuël, a messenger angel of God.
Verily, there are many angels with tasks in heaven.

Daniël 8, verse 15 to 26  While I, Daniël, was watching the vision and trying to understand it, there before me stood one who looked like a man. And I heard a man’s voice from the Ulai calling, “Gabriël, tell this man the meaning of the vision.” As he came near the place where I was standing, I was terrified and fell prostrate. “Son of man,” he said to me, “understand that the vision concerns the time of the end.” While he was speaking to me, I was in a deep sleep, with my face to the ground. Then he touched me and raised me to my feet. He said: “I am going to tell you what will happen later in the time of wrath, because the vision concerns the appointed time of the end. The two-horned ram that you saw represents the kings of Media and Persia. The shaggy goat is the king of Greece, and the large horn between its eyes is the first king. The four horns that replaced the one that was broken off represent four kingdoms that will emerge from his nation but will not have the same power. “In the latter part of their reign, when rebels have become completely wicked, a fierce-looking king, a master of intrigue, will arise. He will become very strong, but not by his own power. He will cause astounding devastation and will succeed in whatever he does. He will destroy those who are mighty, the holy people. He will cause deceit to prosper, and he will consider himself superior. When they feel secure, he will destroy many and take his stand against the Prince of princes. Yet he will be destroyed, but not by human power. “The vision of the evenings and mornings that has been given you is true, but seal up the vision, for it concerns the distant future.”

Daniël 9, verse 21  While I was still in prayer, Gabriël, the man I had seen in the earlier vision, came to me in swift flight about the time of the evening sacrifice.

Daniël 1, verse 11 to 20  Daniël then said to the guard whom the chief official had appointed over Daniël, Hananiah, Mishaël and Azariah, “Please test your servants for ten days: Give us nothing but vegetables to eat and water to drink. Then compare our appearance with that of the young men who eat the royal food, and treat your servants in accordance with what you see.” So he agreed to this and tested them for ten days. At the end of the ten days they looked healthier and better nourished than any of the young men who ate the royal food. So the guard took away their choice food and the wine they were to drink and gave them vegetables instead. To these four young men God gave knowledge and understanding of all kinds of literature and learning. And Daniël could understand visions and dreams of all kinds. At the end of the time set by the king to bring them into his service, the chief official presented them to Nebuchadnezzar. The king talked with them, and he found none equal to Daniël, Hananiah, Mishaël and Azariah; so they entered the king’s service. In every matter of wisdom and understanding about which the king questioned them, he found them ten times better than all the magicians and enchanters in his whole kingdom.