One is often bullied as a Jew, worldwide! Verily, throughout the ages terrible events have taken place, and even today, little has changed! 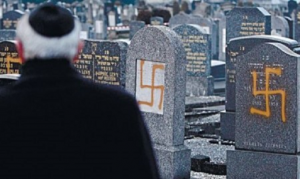 Hello, welcome! October 15, 2014 The following message was brought on word for word by an angel of the Lord, in the name of Yeshua HaMashiach, Jesus Christ, on behalf of the God of Abraham, Isaac and Jacob to end-time Prophet Benjamin Cousijnsen.

Shalom! I greet you in the wonderful name of Yeshua HaMashiach, Jesus Christ. Verily, my name is Criola and I am a messenger angel of God.

Verily, worldwide still many demolitions are being caused at the cemeteries and synagogues and Jewish institutions.
Verily, worldwide many Jews are killed by clubs, that call themselves Jew-haters and Jew hunters. In secret, even a Jew-hatred day is being held, where they come together to exchange ideas! There is no excuse. On July 24, 2013, was revealed to you by Prophet Benjamin Cousijnsen in the message, entitled: ‘Salmaël, an obsessive hateful anti-Semitic fallen angel!’ that this anti-Jewish demon is also working today in many people. This demon hates God’s people due to the wealth, and especially because they are God’s people! This demon makes believe, that the Jews have killed Yeshua HaMashiach, Jesus Christ, and that they are bad.

One is often bullied as a Jew, worldwide!
The Jew-hatred goes so far, that they not only cause destruction to Jewish institutions, but also harm the Jews. Many even consider in schools, through all kinds of circumstances and harassment by the haters, to seriously end their own lives! Verily, near many institutions, such as in Rotterdam and Amsterdam and The Hague, permanent and close supervision is exercised.

Verily, throughout the ages terrible events have taken place.
And even today, little has changed! Only, the media is often silenced, when it is about God’s people. Verily,

Psalm 9, verse 8 to 10  And he shall judge the world in righteousness. He will administer judgment to the peoples in uprightness. The LORD will also be a high tower for the oppressed; A high tower in times of trouble. Those who know your name will put their trust in you, For you, LORD, have not forsaken those who seek you.
Psalm 128, verse 1 Blessed is everyone who fears the LORD, Who walks in his ways.

John 8, verse 31 and 32  Jesus therefore said to those Jews who had believed him, “If you remain in my word, then you are truly my disciples. You will know the truth, and the truth will make you free”.
John 14, verse 6 Jesus said to him, “I am the way, the truth, and the life. No one comes to the Father, except through me”.

Isaiah 48, verse 17  Thus says the LORD, your Redeemer, the Holy One of Israel: I am the LORD your God, who teaches you to profit, who leads you by the way that you should go.
Isaiah 53, verse 3 to 10 He was despised, and rejected by men; a man of suffering, and acquainted with disease: and as one from whom men hide their face he was despised; and we didn’t respect him. Surely he has borne our sickness, and carried our suffering; yet we considered him plagued, struck by God, and afflicted. But he was pierced for our transgressions, he was crushed for our iniquities; the punishment that brought our peace was on him; and by his wounds we are healed. All we like sheep have gone astray; everyone has turned to his own way; and the LORD has laid on him the iniquity of us all. He was oppressed, yet when he was afflicted he didn’t open his mouth; as a lamb that is led to the slaughter, and as a sheep that before its shearers is mute, so he didn’t open his mouth. By oppression and judgment he was taken away; and as for his generation, who among them considered that he was cut off out of the land of the living for the disobedience of my people to whom the stroke was due? They made his grave with the wicked, and with a rich man in his death; although he had done no violence, neither was any deceit in his mouth. Yet it pleased the LORD to bruise him; he has put him to grief: when you shall make his soul an offering for sin, he shall see his seed, he shall prolong his days, and the pleasure of the LORD shall prosper in his hand.

John 3, verse 16 to 21  For God so loved the world, that he gave his one and only Son, that whoever believes in him should not perish, but have eternal life. For God didn’t send his Son into the world to judge the world, but that the world should be saved through him. He who believes in him is not judged. He who doesn’t believe has been judged already, because he has not believed in the name of the one and only Son of God. This is the judgment, that the light has come into the world, and men loved the darkness rather than the light; for their works were evil. For everyone who does evil hates the light, and doesn’t come to the light, lest his works would be exposed. But he who does the truth comes to the light, that his works may be revealed, that they have been done in God.
And verse 33  He who has received his witness has set his seal to this, that God is true.

Verily, Yeshua HaMashiach, Jesus Christ, wants that one will examine oneself carefully and repent!

Leviticus 19, verse 18  You shall not take vengeance, nor bear any grudge against the children of your people; but you shall love your neighbor as yourself. I am the LORD.